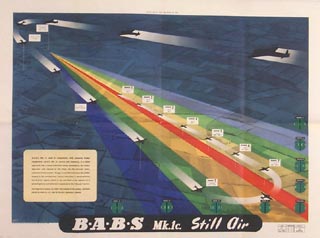 Beam Approach Beacon System – BABS – was a homing device used to help pilots land in poor visibility. Radio beacons on the airfield transmitted signals, which were picked up by aircraft on their approach to land.

When the aircraft crossed the Outer and Inner Marker Beacons the pilot also detected their distinctive signals, which told him how far he was from the point of touch-down. He used this information to check his rate of descent until the ground came into view and he could make a safe visual landing.

The Airspeed Oxford at RAF Museum Hendon is an example of one of the aircraft used to train pilots in the use of BABS.