The junior section of the Sturmabteilung (SA or storm troopers) was formed in 1922 for the education of Germany’s youth in the principles of National Socialism. By 1926 the Hitler-Jugend (HJ or Hitler Youth) organisation had appeared. Six years later it became a separate organisation into which all existing youth organisations such as the Boy Scouts were absorbed.

There were different sections based on the age and sex of its members. Girls, for example, between fourteen and twenty-one, were part of the Bund Deutscher Mädel (BDM or League of German Girls). Their main activities were sports, camping and preparation for motherhood or military service.

In wartime they were used to support the fire services, the police and anti-aircraft gun and searchlight crews.

Music and club songs have always played a large part in bonds between members of Youth Movements and in engendering a corporate identity. The Hitler-Jugend saw music and singing as major tool in reinforcing and cementing the bonds between its members and establishing an elite outlook by its members. 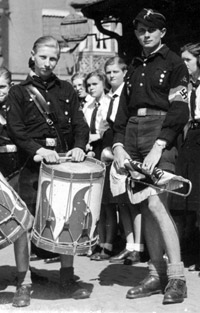 Each unit had its own drums and trumpets and some mustered whole military bands.

The large drums used were based on instruments played by the Swiss and German mercenary pike-men of the 16th Century.