…And all this – because of you 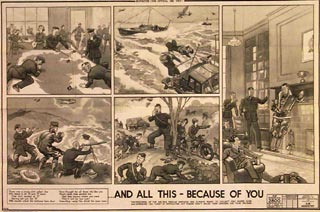 When aircrew came down either on land or in the sea (in the drink as it was known in RAF parlance) or were reported overdue, the RAF Rescue Services were sent to look for them. This involved the RAF’s Air/Sea Rescue motor launches and Coastal Command aircraft, as well as the Mountain Rescue Teams for high ground crashes. Other services such as the civilian Police, the Army and Home Guard were also used to search for aircrew. As this used extensive manpower and resources it was better for everyone if false alarms were kept to a minimum.

When badly damaged (or shot up) aircraft were returning from operations, they would land at the closest available airfield – which was often not their own. Sometimes the crew were so relieved to have reached safety that they forgot to contact their home airfield and went straight to the Mess for rest and recuperation before returning to their base.

By using humorous images of the chaos and trouble caused if they did not report in, this air diagram delivered a serious message to aircrews: always report in to home base after an unexpected landing elsewhere.