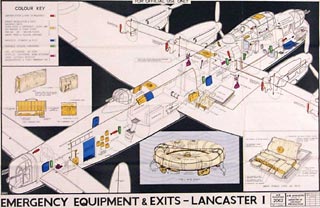 The RAF made much use of their four-engined heavy bombers during the Second World War, and material was produced to train the seven-man crews. Cutaway drawings were heavily used, as they gave a clear view of the interior of the aircraft, and showed where equipment could be found.

The colour codes used for safety equipment showed crews where each piece of emergency equipment was located and which items were to be used together. It was important to show the crew where the fuel valves were in order to extinguish engine fires; but perhaps the two most important items of safety equipment were the aircrew’s parachutes and dinghy. The importance of these items is shown here, as the ‘J’ Type Mk III dinghy is described in close-up detail; including an illustration of where the equipment is stored in the dinghy.

Knowing the interior layout could mean the difference between life and death during an emergency evacuation of the aircraft. A clear understanding of the obstacles to escape, such as the main spar, would help the crew to react instinctively and correctly in a crisis.