Remembrance is a chance to think of those who have made the ultimate sacrifice during conflicts and to remember the families who have lost their loved ones. It is also a time to think of the men and women who have returned from conflict with psychological and physical injuries.

There have been many conflicts since the Royal Air Force has been in existence, as well as in the years preceding its formation in 1918.

The First World War, 1914 – 1918, witnessed the deaths of, amongst many others, the men from the Royal Flying Corps and the Royal Naval Air Service, which combined to form the Royal Air Force in 1918. 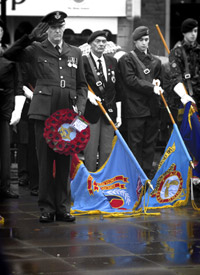 What support was, and is, offered to them in their time of grief and loss?

This exhibition will look at some of the organisations supporting the families of serving Royal Air Force personnel in the event of death in action or in service.