The following exhibitions are available online only and are not on display at the Royal Air Force Museum.

The Avro 504J is selected as the standard trainer because its performance is close to that of an operational aircraft. The De Havilland D.H.9A, Bristol Fighter and Vickers Vimy are all used in courses for conversion to operational flying. 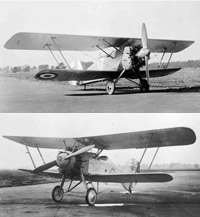 The de Havilland Gipsy Moth is brought in to provide the core of elementary training at the RAF College, the Central Flying School and 5 Flying Training School.

The de Havilland Tiger Moth is introduced to replace the de Havilland Gipsy Moth, which is considered to be too docile. It becomes the foremost elementary trainer throughout the Commonwealth because it is forgiving enough for initial training but challenging in more advanced manoeuvres.

The Avro Tutor is selected to replace the Avro 504N as the standard basic trainer after a series of trials against several other types.

The Hawker Hart Trainer takes over the advanced trainer role from the Armstrong Whitworth Atlas Trainer. 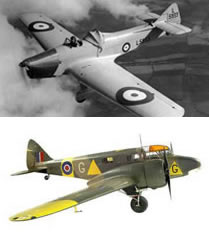 The Miles Magister (top) and Airspeed Oxford (bottom) are introduced to provide elementary and twin-engine monoplane training in the run-up to war.

The North American Harvard trainer is brought in because of a delay in delivery of the Miles Magister. It becomes one of the main advanced training aircraft during the Second World War.

The Miles Master is introduced to provide advanced monoplane training.

The Hunting Percival Prentice is brought in as an elementary trainer to replace the out-dated Tiger Moth.

The Vickers Varsity is introduced as an all-purpose advanced trainer to bridge the gap between basic training and the Operational Conversion Units.

Following a decision to go “all jet”, a turbine version of the Hunting Percival Provost, the Jet Provost, is introduced. This provides the bulk of RAF pilot training for the next three decades.

A two-seat training version of the Folland Gnat is chosen as a “fast jet” trainer and remains in use until 1978. 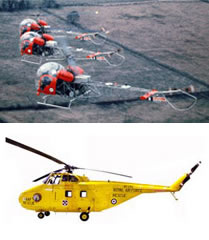 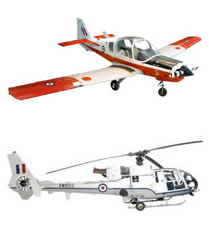 The Beagle Bulldog is introduced to replace the de Havilland Chipmunk on the University Air Squadrons. In addition, a new basic helicopter trainer, the Westland Gazelle, is brought in. 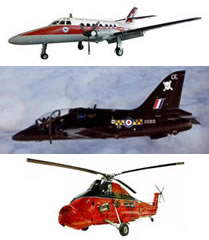 The Vickers Varsity is replaced by the Handley Page Jetstream for multi-engine training. The BAe Hawk is also introduced to take over from the Folland Gnat and to ease pressure on the Hunting Percival Jet Provost. The Westland Wessex replaces the Westland Whirlwind in the advanced helicopter training role.

The Shorts Tucano replaces the Hunting Percival Jet Provost. It later becomes the basic jet trainer because of its jet-like handling capabilities and the fact it is fully aerobatic.

The Slingsby Firefly is introduced for use as a lead-in aircraft for multi-engine trainees because its side-by-side dual controls introduce pupils to dual-crew operations. 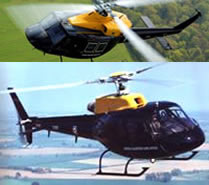 The Westland Wessex is replaced by the Bell Griffin in the advanced helicopter training role. At the same time, the Eurocopter Squirrel takes over as the basic helicopter trainer.

The Beech King Air B209, the RAF’s newest trainer, is introduced as an advanced multi-engine trainer.