Women experienced the Battle of Britain first hand. They also took an active role in it. Routinely working under front-line conditions women daily demonstrated their bravery and dedication to duty. Their contribution to the Battle’s outcome was crucial. 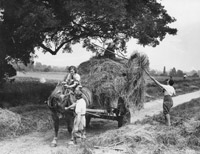 On the Home Front hardships were endured by many. Rationing was in force.

During the 1940 season members of the Women’s Institute made great efforts to assist in food provision and preserved 1764.5 tonnes of fruit.

Many women worked in factories building aircraft and equipment whilst female pilots of the Air Transport Auxiliary (ATA) delivered aircraft to stations around the country. 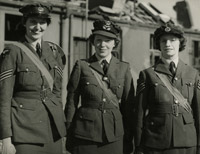 The Women’s Auxiliary Air Force (WAAF) worked alongside the Royal Air Force (RAF). The majority of WAAFs at this time worked in the various Commands as drivers, clerks, telephonists, cooks and orderlies. Personnel served at airfields, balloon barrage sites and radar stations across the United Kingdom; all of which were primary targets for the German Air Force. 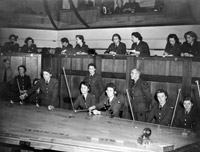 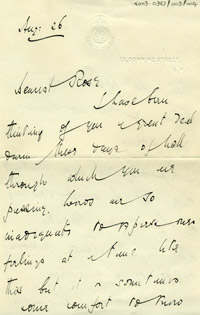 The courage and example shown by many WAAFs during the Battle of Britain had a huge impact on how the service developed.

Six Military Medals were awarded to WAAFs for exceptional service. Three of them are shown here. Flt Off Elspeth Henderson MM, Sgt Joan Mortimer MM, and Sgt Helen Turner MM all served at RAF Biggin Hill and remained at their posts during German air raids.

Women played a vital role throughout the command and control network set up in defence of Great Britain. This had a profound effect on Fighter Command’s action and success. 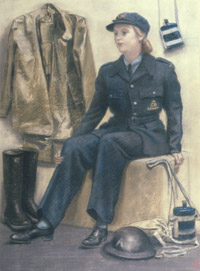 At radar stations, operators provided the position of enemy aircraft and relayed this information to personnel in filter and operation rooms where it was reconciled and displayed.

Underpinning the practical contributions made by women to the Battle of Britain was the intangible comfort and moral support which helped keep the RAF flying. Personal battles of anxiety, fear and loss were also fought by many.

As well as experiencing the ‘blitz’ themselves, thousands of women took an active part in civil defence. The roles varied with many working as air raid wardens and ambulance drivers.

Women formed part of the crew at anti-aircraft gun and observer posts whilst others operated mobile canteens and assisted those left homeless by the bombing.