“We shall never surrender”

Even before 1939, Britain began implementing measures in preparation for war. Key existing organisations such as the police were given specialised training for their wartime role. Following Anthony Eden’s call in May 1940 for a new defence organisation 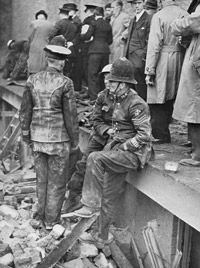 to be raised, enrolment for the Local Defence Volunteers (LDV), later renamed the Home Guard, was carried out at police stations. The co-operation between the police, fire service and civil defence groups was essential in maintaining public order, safety and morale, as demonstrated on the ferocious night bombing raid of 7th September 1940.

There were several types of bomb shelters available to civilians. In London people congregated on the platforms of the tube. In towns communal shelters were built which could protect approximately 50 people or alternatively some people had Anderson shelters in their gardens. Evacuation of children from major cities 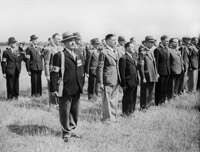 had begun on a small scale in 1939 but had tapered off during the Phoney War period. In July 1940 another evacuation took place when the Luftwaffe began bombing Britain. 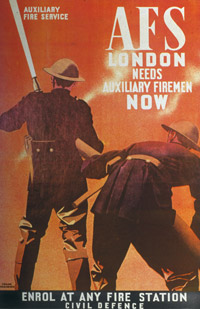 Upon the outbreak of war the Auxiliary Fire Service was formed to assist the Fire Brigade.

Their job was essential and extremely dangerous as they risked serious injury and death.

When Anthony Eden launched his appeal for Local Defence Volunteers (LDV) he said they should be men aged between 40 and 65 who were able to fire a gun.

Many had served as soldiers during the First World War and took up arms once again to defend Britain from invasion. 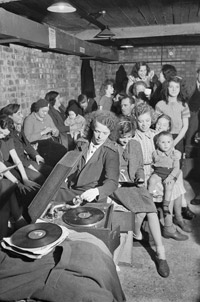 People sought shelter from bombing attacks in all sorts of places including the underground, churches and closer to home in Anderson shelters.

In the communal shelters food and drinks were distributed and, as pictured here in North London, music was played to lighten the mood.