Prevention of tyre and brake accident 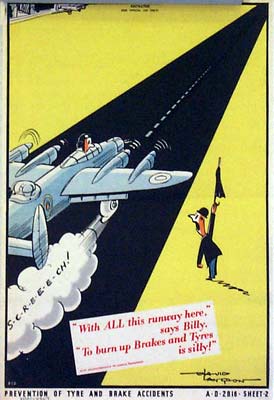 Pilots had a responsibility to look after the aircraft to the best of their ability, which included avoiding accidents caused by carelessness. Problems could occur when the aircraft was damaged through enemy action, mechanical fault or pilot error…a second’s misjudgement could lead to injuries and damaged equipment; therefore it was vital for pilots to know how to land an aircraft properly.

A common mistake was for the pilot to put the brakes on hard – even though the aircraft had space to slow down whilst travelling along the length of the runway. Why stop in half the runway length when the aircraft could stop safely three quarters of the way along it?

Harsh braking led to punctures, burst tyres and loss of control. One consequence of this was damage and injury, another that the runway would be blocked, leading to loss of access for other aircraft; and very importantly, wearing out the tyres and brakes meant that they would have to be replaced using precious raw materials.