Memorials to war dead date back before the 20th Century but these either referred to an individual or all of the dead in a collective way. 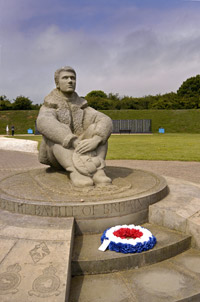 The huge casualties suffered in the First World War meant that every community, or even extended family, in the United Kingdom and in Commonwealth was touched by the tragedy of loss. There was a passion and determination that those who had lost their lives would not be forgotten. A major programme of public and private memorial design and construction was undertaken. These ranged from community crosses and plaques to buildings, gardens, chapels and windows.

After the Second World War it was more likely that additional names would be added to the original municipal memorials and in fact this tradition has continued with more recent conflicts and their casualties.

In all it is estimated that over 70,000 memorials have been produced during the 20th Century covering the dead of the two World Wars. Some no longer exist while others have moved from their original location, but they are still a familiar sight in most towns and cities.

There is also the Armed Forces Memorial at the National Memorial Arboretum, Alrewas, Staffordshire which commemorates those who have died in service since 1 January 1948. It provides an opportunity to remember not only those killed in conflict but those servicemen and women who have died on duty or been killed by terrorist action.