Back to civilian life

After returning to the UK and a period of leave, Bader was promoted to Group Captain and took command of first the Fighter Leaders School,

and then the North Weald fighter sector. He was given the honour of leading the first Battle of Britain flypast on 15 September 1945.

Bader finally left the RAF in March 1946. He had realised that his legs would make it difficult for him to serve in hot climates, which would limit his ability to gain the experience needed for further promotion. It had also become clear to him that the post-war RAF would be very different to the one in which he had served.

He rejoined Shell in July 1946, flying the company’s aircraft around Europe, and the Middle and Far East. Bader became Managing Director of Shell Aircraft Ltd
and retired in 1969. Already a well-known pilot, his fame grew in 1954 with the publication of Paul Brickhill’s biography Reach for the Sky and again when the feature film based on the book was released the following year. 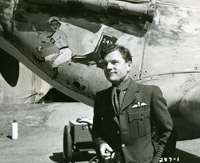 From 1972 to 1978 he was a member of the Civil Aviation Authority and chaired a committee set up to examine the effect of flying time on pilot fatigue. The committee made a number of recommendations which would help to prevent accidents.

Much of Bader’s time was devoted to encouraging those who had lost limbs. Many new amputees received unexpected visits or inspiring letters. In the course of a brief conversation Bader brought hope to replace despair. A newspaper report of one visit quotes him as saying “Don’t listen to anyone who tells you that you can’t do this or that. That’s nonsense. Make up your mind you’ll never use crutches or a stick, then have a go at everything… never, never let them persuade you that things are too difficult or impossible.”

In addition to his wartime decorations, Bader was appointed Commander of the Order of the British Empire (CBE) in 1956 and Knighted in 1976, in both cases for service to the disabled.

The exertion of walking on artificial legs for over 50 years had placed extra stress on his heart, and he died suddenly in 1982 at the age of 72.