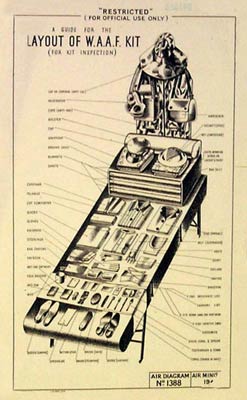 Although the WAAF uniform, designed to resemble the RAF’s as closely as possible, was introduced before the Second World War, it was many weeks before personnel had the full kit illustrated. By April 1940 most WAAFs had left their civilian clothes behind and wore the complete uniform. Greatcoats were not issued to the WAAF before 2nd October 1940.

A third shirt and two more collars were added to the WAAF’s allocation, after it was decided that hygiene was difficult with the possession of only two shirts! Later another pair of shoes was also added. The Working Serge Suit was introduced for Balloon Operators in 1941; although many trades asked for this uniform, it was only worn by those trades entitled to it, and never universally worn. Shown here is the complete kit as of 1944.