The Poles were keen to fight but the RAF would not at first let them fly operationally. This was because few of the exiles spoke English and there

was concern about their morale. What the British did not yet realise was that many of the Poles were excellent pilots. Having come through the Polish and French Campaigns, they had more combat experience than most of their British comrades and they employed superior tactics.

As the Battle of Britain wore on, and the shortage of trained pilots became critical, the exiles were accepted into RAF squadrons and two Polish fighter units, Nos. 302 and 303 Squadrons, 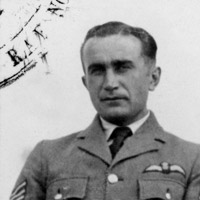 were formed. Once committed to action, the Poles flew and fought superbly, shooting down 203 enemy aircraft for the loss of 29 pilots killed. No. 303 Squadron became the most successful Fighter Command unit in the Battle, shooting down 126 German machines in only 42 days. Czech Sergeant Josef Frantisek, also of ‘303’, was the top scoring pilot with 17 confirmed victories.

“Had it not been for the magnificent material contributed by the Polish squadrons and their unsurpassed gallantry, I hesitate to say that the outcome of the Battle would have been the same.”