Disaster strikes – but what is the cause?

After only eighteen months of service two aircraft disappeared within three months of each other. The Secretary of State for Civil Aviation ordered a full investigation into the causes of the disappearances. This was carried out by the Royal Aircraft Establishment (RAE) at Farnborough and a court of enquiry was established. 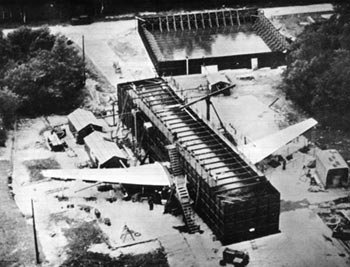 One part of the investigation examined cabin pressurisation. This used water to produce cabin loading and hydraulic rams to generate wing loading. BOAC Comet, Yoke Uncle, was placed inside a water tank with the wings protruding through seals in the walls of the tank. The loads which were applied simulated a three hour flight in ten minutes.