The Battle of Britain Phase Four

“My fellow commanders, we are now on the brink of victory. Our intelligence has…informed us that the RAF is now down to less than a hundred fighter aircraft, the airfields protecting London are out of action because of the superb and accurate bombing of our bomber force… The next target must be London itself.”

By early September, the effect of the fighting had taken a terrible toll of both pilots and aircraft. On 8th September Dowding introduced his ‘Stabilisation Scheme’ for regrouping squadrons by pilot experience. This provided some relief to hard pressed squadrons. 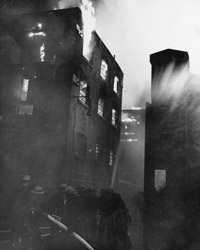 Large-scale, round-the-clock attacks started on 7th September with raids against the docks of East London, using large formations of bombers with single and twin-engined fighter escorts. Luftflotte 3 reinforced the change of target by continuing to pound the capital that night.

The Luftwaffe was well behind schedule with its campaign to destroy the RAF, but Göering hoped that Fighter Command could still be exhausted by the obligation to continue fighting in defence of the capital and other centres of population and industry. 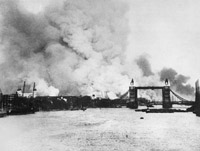 The fighting was still bitter, as shown by the climax around the 15th, but there were few days in September when RAF losses exceeded the Luftwaffe’s. As September progressed, the ration of bombers to fighters was reduced, and the fighters were tied more closely to smaller bomber formations. These tactical changes failed to diminish the ability or Fighter Command to inflict losses . By early October, the Luftwaffe was glad of worsening weather as an excuse to call off massed daylight operations, and rethink its objectives and tactics. 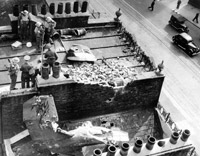 Fighter Command had gained the upper hand at last and Hitler was forced to postpone the invasion plans.

The fires started in the east end of London on the night of 7 September were still visible on the following day.

Sgt Holmes had taken off with the rest of 504 Squadron from Hendon and was credited as the man who brought down the aircraft which was about to bomb Buckingham Palace.