Kesselring commanded Luftflotte 2 during the Battles of France and Britain. 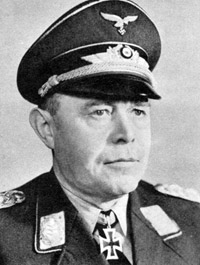 This tough, efficient professional soldier joined the army in 1914, transferring to the Luftwaffe in 1933. In 1938 he took command of Luftwaffeengruppe 1 (later renamed Luftflotte 1) and commanded this formation during the campaign in Poland.

Kesselring believed that air superiority could be established by using bombers to destroy fighter stations while the large number of escorting fighters would destroy the RAF opposition which rose to defend them.

He altered his plans in September 1940 when he was ordered to switch to attacks on cities and industrial targets. He tended to concentrate Luftflotte 2 on daylight attacks against a few targets hard rather than dissipating effort over many targets.

In late 1941 Luftflotte 2 and Kesselring moved to the Mediterranean. In the air campaign against Malta it was Kesselring’s misfortune to find his 1940 adversary Keith Park in charge of the defences.

Although the later Italian campaign demonstrated his skilful use of limited resources in defence his reputation was marred by atrocities committed by troops under his command.

Sperrle commanded Luftflotte 3 during the Battles of France and Britain. 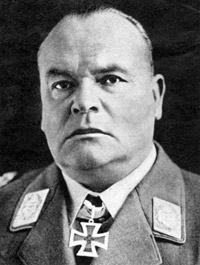 Upon his return to Germany he took command of Luftwaffengruppe 3 and remained in that post when it was renamed Luftflotte 3 just before the outbreak of war in 1939. During the 1940 French campaign his Luftflotte provided air support for the powerful armoured thrust through southern Belgium and northern France.

He remained in command throughout the Battle of Britain and the night blitz. In the spring of 1941 he lost most of his flying units to support the attack on the Soviet Union.

His limited forces were completely overwhelmed during the Allied invasion of northern France in 1944. Hitler blamed Sperrle personally for the failure and in August he was transferred to the Reserve.

He joined the Imperial Army in 1907. During the First World War he served as an infantry officer and then joined the Army General Staff. After the war he remained in the Army. In 1933 he transferred to the new Luftwaffe.

From June 1937 to January 1939 he was Chief of General Staff. In early 1940 he commanded Luftflotte 1 then based in northern Germany and Poland. In May he took command of the newly formed Luftflotte 5 based in Norway and Denmark.

After the disastrous attack on 15 August, when his aircraft attempted to attack targets in northern England, Stumpff’s units played very little further part in the Battle of Britain. He remained in command of Luftflotte 5 until the end of 1943. In early 1944 he was appointed commander of Luftflotte Reich. Charged with defeating the American daylight air offensive his inferior forces failed in their mission. With fewer aircraft and men this was hardly surprising.

He represented the Luftwaffe at the unconditional surrender of Germany in Berlin on 8 May 1945.

During the entire period Jeschonnek was Chief of the General Staff of the Luftwaffe. 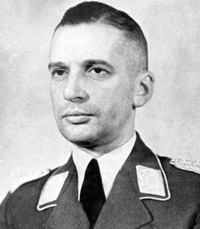 The next six years saw a meteoric career which culminated in his appointment as Chief of the General Staff of the Luftwaffe on 1st February 1939. He held this post until his death.

As a great proponent of the dive bomber he underestimated the importance of technological advances. The Luftwaffe appeared to be all conquering during the campaigns in Poland and France but was in fact suffering from equipment deficiencies and poor logistics. Jeschonnek failed to remedy this and these problems became all too apparent during the Battle of Britain and subsequent campaigns in Russia and the Mediterranean.

During the years of German success he was held in high regard but as the war turned against Germany he fell out of favour with both Hitler and Göering. Although a devoted follower of Hitler Jeschonnek had many enemies within the leadership of the Luftwaffe. By 1943 he was isolated and suffering from depression. On 19 August he shot himself.