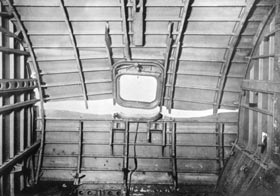 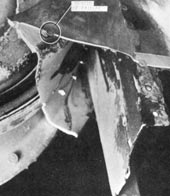 The skin of Yoke Uncle had undergone 3057 flight cycles (1221 actual and 1836 simulated) before a fatigue crack produced a failure. This occurred at a rivet hole near the forward port escape hatch.

Fatigue is the growth of a crack. This takes place with repeated loading at a level below that which would normally cause the failure of the material. This was little understood at the time.

It was concluded that Yoke Uncle would have suffered from cabin failure at around 9000 flight hours, had it continued in service.

The reconstruction of one of the crashed Comets (Yoke Peter) continued until September 1954 as pieces were recovered from the sea bed by the Royal Navy.

Eventually about 70% of the aircraft was recovered and this confirmed that fatigue crack growth in the pressure cabin was the cause of the accident.