Radar relies on a transmitted radio signal being reflected back from an aeroplane, like an echo. This echo is then received and analysed to determine the aircraft’s range, height and bearing from the receiver.

The time taken for the signal to travel from the transmitter to the aircraft and back to the receiver depends on the range. By displaying the returning signal on a calibrated cathode ray tube, the range can be read off.

Direction can be determined by comparing the way in which the returning signal is received by two aerials set at right angles to each other. The Chain Home receiver displayed uses a calibrated dial. It was turned until the ‘blip’ in the trace on the screen disappeared, and the bearing could then be simply read off the scale.

To determine height the dial was then connected to two aerials set at different heights above grounds. The reading was fed into an electrical calculator, together with the range and bearing data. This early computer then calculated the height. A display panel gave a grid reference for the aircraft’s position and its height to the nearest 500 feet.

How it was integrated into the Dowding System

The existence of a British RDF (radar) system was well known to the Luftwaffe from intelligence gathered before the war, but the highly developed “Dowding System” linked with fighter control had been a well kept secret.

The two diagrams show how radar and Royal Observer Corps posts provided the initial information, how it was assessed and then sent out ultimately to the fighter squadrons.

The system did have some limitations but it was the most advanced and comprehensive anywhere in the world. 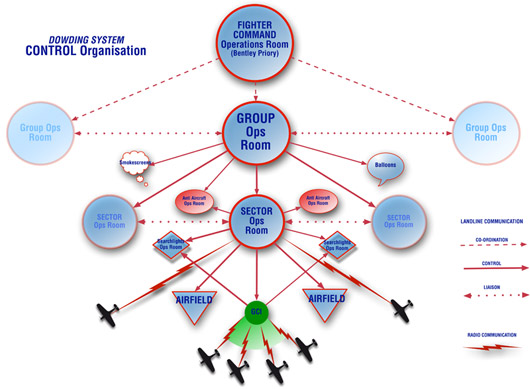 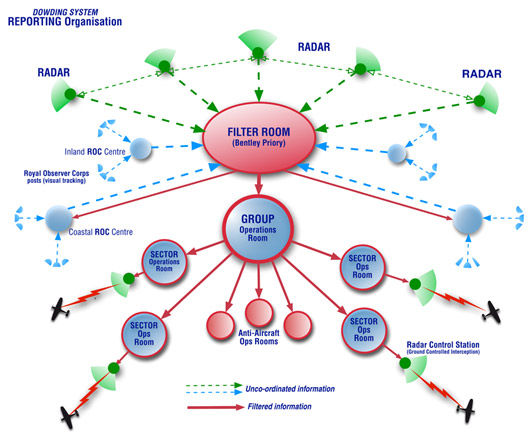