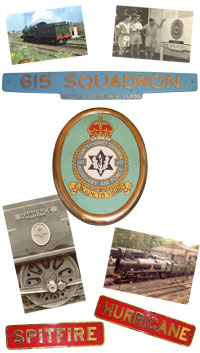 The Royal Air Force Museum’s Charter requires that it collects examples of artefacts associated with the Royal Air Force, and these locomotive plates are part of the related social history.

The RAF Museum holds the following nineteen single Battle of Britain Class steam locomotive Nameplates from a class of 44 engines that once ran on British Railways.