Letter from Wing Commander FW Winterbotham, of the Air Ministry’s Directorate of Intelligence, to GM Garro Jones, the Parliamentary Secretary for the Ministry of Production. Winterbotham expresses enthusiasm for Wallis and his “rota-mine” which had already proved itself two months earlier in a test against the Nant-y-Gro Dam in Wales. 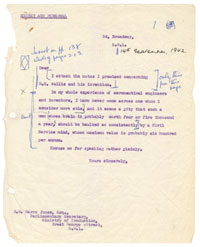 Winterbotham’s letter also highlights the official reluctance and lack of confidence in the project, which was due to the discouraging conclusions drawn from previous plans to breach the dams. This lack of confidence by the authorities led to Wallis being told to stop work on the mine on 23 February 1943 by Air Marshal F. J. Linnell, the Controller of Research and Development at the Ministry of Aircraft Production. Linnell changed his mind three days later and allowed Wallis to continue.