In pre-war Czechoslovakia the motto used for aviation was “The Sky is our Ocean.” Airmen were very popular. Outstanding pilots were called “Kings of the Air” – and not incorrectly. František NOVÁK was one of those who held this title. Not only was he a Czechoslovak military pilot, but he was also an outstanding aerobatic pilot. As leader of the Czechoslovak aerobatic team at the 1937 World Aviation competition in Zurich, they succeeded in beating off stiff opposition from rival national teams, and, on their return, were welcomed back as the Olympic champions that they are today.

Photograph from the magazine Pražský Ilustrovaný Zpravodaj (The Prague Illustrated Reporter) about the return of the Czechoslovak Aerobatic team from the 1937 World Aerobatic Championships at Zurich with the title “The Winners’ Celebratory Return.”

Pilots were regarded as one of the deterrents against Nazi Germany. This was the reason for the Czechoslovak authorities to instigate the “One Thousand Pilots for the Republic” and the “Masaryk’s Aviation League” training schemes. Here, young Czechoslovak men were covertly trained to become military pilots. Some of the pilots trained under these schemes were later to become members of the RAF in England. 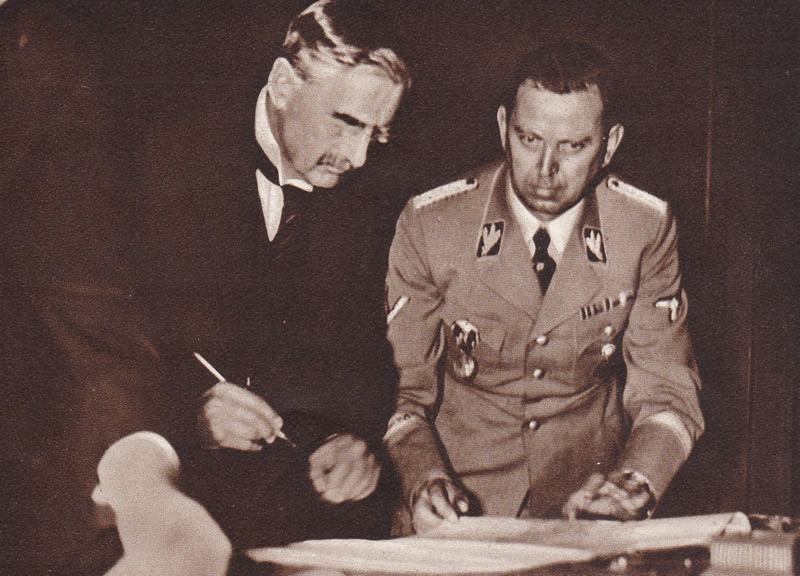 The infamous Munich Agreement was signed on 30th September 1938. Only three days earlier, Neville Chamberlain, the British Prime Minister, in a radio address to the British people had said of Czechoslovakia: “How horrible, fantastic, incredible it is, that we should be digging trenches and trying on gas masks here because of a quarrel in a faraway country between people of whom we know nothing.” Czech history describes the Munich Agreement, or as known in the (now) Czech Republic the ‘Munich Dictate’ as “about us, without us,” – Czechoslovakia was not even permitted to be a party in the negotiations. Czechoslovakia had two choices: either they resisted Nazi Germany on there own or they submitted to the annexations of the Munich Agreement. Initially the Munich Agreement was popular with the majority of the British public as they believed it had prevented war with Germany. But it also had its opponents, including the politicians Winston Churchill and Anthony Eden, who criticised the British Government for behaving dishonorably. In the House of Commons, Churchill was to declare that “England, has been offered a choice between war and shame, she has chosen shame and will get war”. Czechoslovakia was forced to abandon their border fortifications and cede the Sudeten regions to Nazi Germany.

Photograph of the signing of the Munich Agreement. Prime Minister Neville Chamberlain signed on behalf of Great Britain.

The following poem was written by František Hrubin in the wake of the Munich Agreement. A Song of Distress – Zpev Úzkosti

Following the occupation of Czechoslovakia, the Nazi’s gained the Czechoslovak armaments industry, one of the largest and most modern in Europe at that time, which they were to use against Poland, France, the USSR and Great Britain. Bouda Club Collection.

Another protection against threats to Czechoslovakia was the border fortifications. However, these fortifications were never actually to be used by Czechoslovakian soldiers. Meanwhile back in Czechoslovakia soldiers took the defence of their border fortifications seriously, as shown by the example of Sgt Arnošt HRAD, who – after the order arrived to evacuate his border post on 3rd October 1938 – fatally shot himself at his post of because he refused to evacuate it and hand it over to the Germans. Additionally, the entire company of Frýdek–Místek’s Czajánek Barracks defended them against Nazi troops on the day they entered Czechoslovakia. Even today, for those in the (now) Czech Republic as to whether the country should have defended itself or not at all is still a topic of discussion. As history has shown Hitler did not adhere to the Munich Agreement and wanted more. With no help from France and Britain, Czechoslovakia was alone and very limited how it could defend itself. The Protectorate of Bohemia and Moravia was created on 15th March 1939 following the occupation of Czechoslovakia; Slovakia declared independence and became a ‘puppet state’ ally to the Germans. 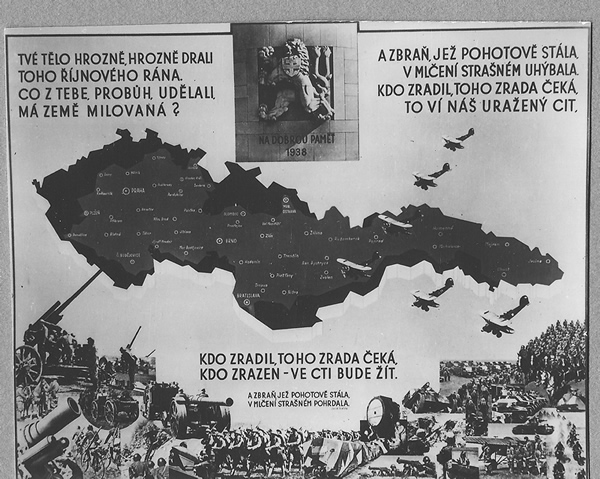 One of the commemorative postcards remembering withdrawal from the border areas as a result of the Munich Agreement and the sentiments with which the population of Czechoslovakia accepted this. You can read the following on the postcard: “They rent your body terribly, terribly on that October morning. For the love of God, what did they do to you, my beloved country? And the arms that stood in waiting turned aside in horrific silence. Betrayal awaits the one who betrayed; our injured heart knows this. Betrayal awaits the one betrayed, the one betrayed – in their heart they will live”. Archive of Martin Vrána.

The occupation of Czechoslovakia was the catalyst for many Czechoslovak soldiers and airmen to begin escaping to Poland in order to fight for liberation of their homeland. Their escape to Poland was not easy. They needed to cross borders, patrolled with armed guards which carried the threat of death; just as dangerous was escape through other countries, which you can read about in other parts of this exhibition.