The Battle of Britain Phase Two

Following Hitler’s War Directive No 16, on 17th July the Luftwaffe began daylight bombing raids. With greater frequency and in larger numbers, the aircraft of Luftflotten 2 and 3 ranged over the English Channel, Straits of Dover and South-East Coast, bombing and mining shipping convoys, ports, shipping lanes and coastal airfields. Some attacks probed inland, to force the RAF to fly up and fight and wear it down. This was accompanied by a stepped-up bombing campaign of spasmodic night attacks on the West, Midlands, and East Coast, RAF facilities and the aircraft industry. 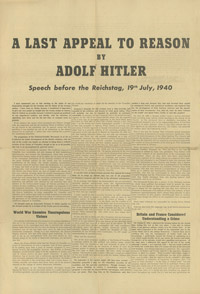 During this phase of about four weeks, the Luftwaffe aimed to place a strangle-hold around Britain by destroying ships and ports, to damage the aircraft industry, to weaken the Home Defence system, especially the strength and efficiency of Fighter Command, to prepare for the full-scale aerial assault planned for mid-August.

Hard lessons were learned about tactics and the continued fighting ability of the RAF, with heavy losses on both sides. After the first large-scale attack on a mainland target – Portland naval base – on 11 August, and the first all-out attack on radar stations on 12 August, German confidence was high as Göering launched Phase Three of the Battle on 13th August.

During what the Germans called Kanalkampf, (“the Channel Battles’), on 19 July a force of Boulton Paul Defiant turret fighters from 141 Squadron on convoy escort was badly mauled by Bf109s off Folkestone, losing six of its nine aircraft. This contributed to the withdrawal of Defiant squadrons from day fighter operations by September 1940.

The photograph shows No 264 Squadron aircraft.

The Royal Navy in the English Channel and North Sea was just as much a target.

HMS Wren, shown here, was sunk by the Luftwaffe on 27 July while escorting minesweepers off Aldburgh, Suffolk.

Another destroyer was sunk in Dover and two more damaged on the same day.

On 8 August the Luftwaffe used some 300 aircraft in an attempt to destroy scattered convoy CW9, codenamed ‘Peewit’ off the South Coast and bring the RAF to battle.