Wing Commander Guy Penrose Gibson was killed on Tuesday 19 September 1944 whilst flying a de Havilland Mosquito over Holland. His book ‘Enemy Coast Ahead’, about his wartime experiences, was published posthumously in 1946. 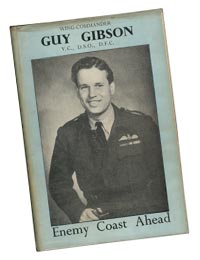 Paul Brickhill’s book ‘The Dam Busters’ followed in 1951. Both books led to the production four years later of the film ‘The Dam Busters’ by the Associated British Picture Corporation, starring Richard Todd as Guy Gibson and Sir Michael Redgrave as Dr Barnes Wallis.

By the time the film was released in 1955 ‘Enemy Coast Ahead’ had been reprinted twenty times and remains in print to this day. What started out as an impossible mission requiring great courage, skill and commitment is now regarded as one of the epic events of the Second World War.