Aircraft in the Far East

Like most Western nations the British underestimated the quality of Japanese aircraft and airmen. At the outbreak of the war in the Far East the RAF was equipped with Brewster Buffalo aircraft. These were soon supplemented with Hawker Hurricanes brought in from the Middle East. In December 1941 Curtiss Mohawks arrived on the North Eastern Indian border. It was not until 1943 that the first Supermarine Spitfires arrived in the Far East. Hurricanes were increasingly used as fighter bombers until they were in turn replaced by Republic Thunderbolts. 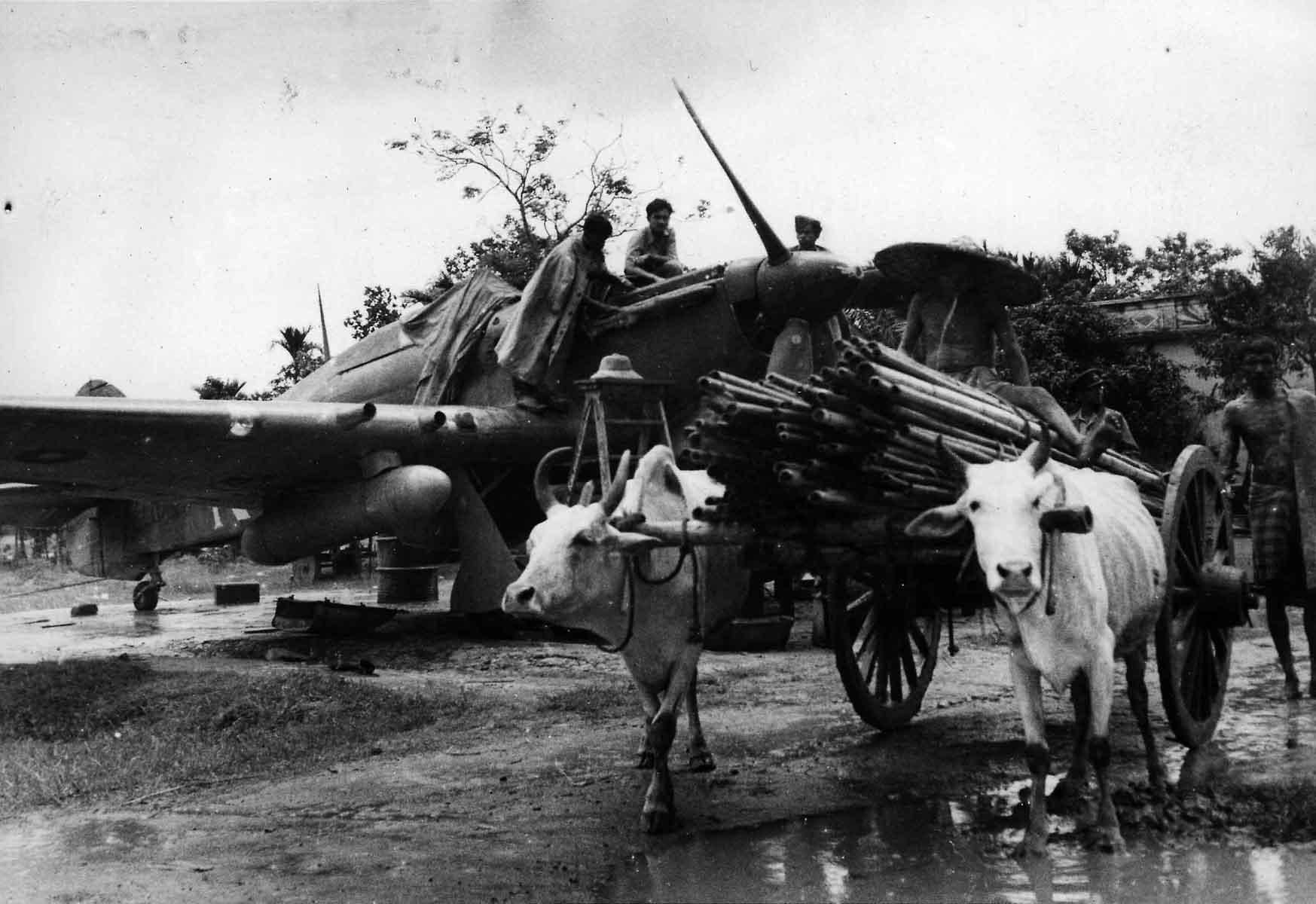 Bristol Beaufighters undertook a major programme against coastal shipping. Their formidable rocket and cannon firepower resulted in the destruction of hundreds of small vessels. Although de Havilland Mosquito aircraft were operational in the area at the end of the war they had suffered their fair share of problems. Their structure had not stood up well to the high temperature and humidity, which had weakened the wood glue on a number of airframes.

The RAF wrongly believed it could continue to operate aircraft in the Far East which had been declared obsolete in other parts of the world. The Japanese almost immediately gained air superiority and the under strength British bomber force was decimated.

Bristol Blenheims continued to operate for a number of years, supplemented by Vickers Wellingtons. The two types were combined to provide the basis of a heavy bomber force. It was not until the arrival of two American bomber types that significant modernisation could take place. The single engine Vultee Vengeance dive bomber provided the RAF with a unique close support tool. They were operated during two critical years, from the summer of 1942 until July 1944, providing vital pin point bombing against Japanese positions. 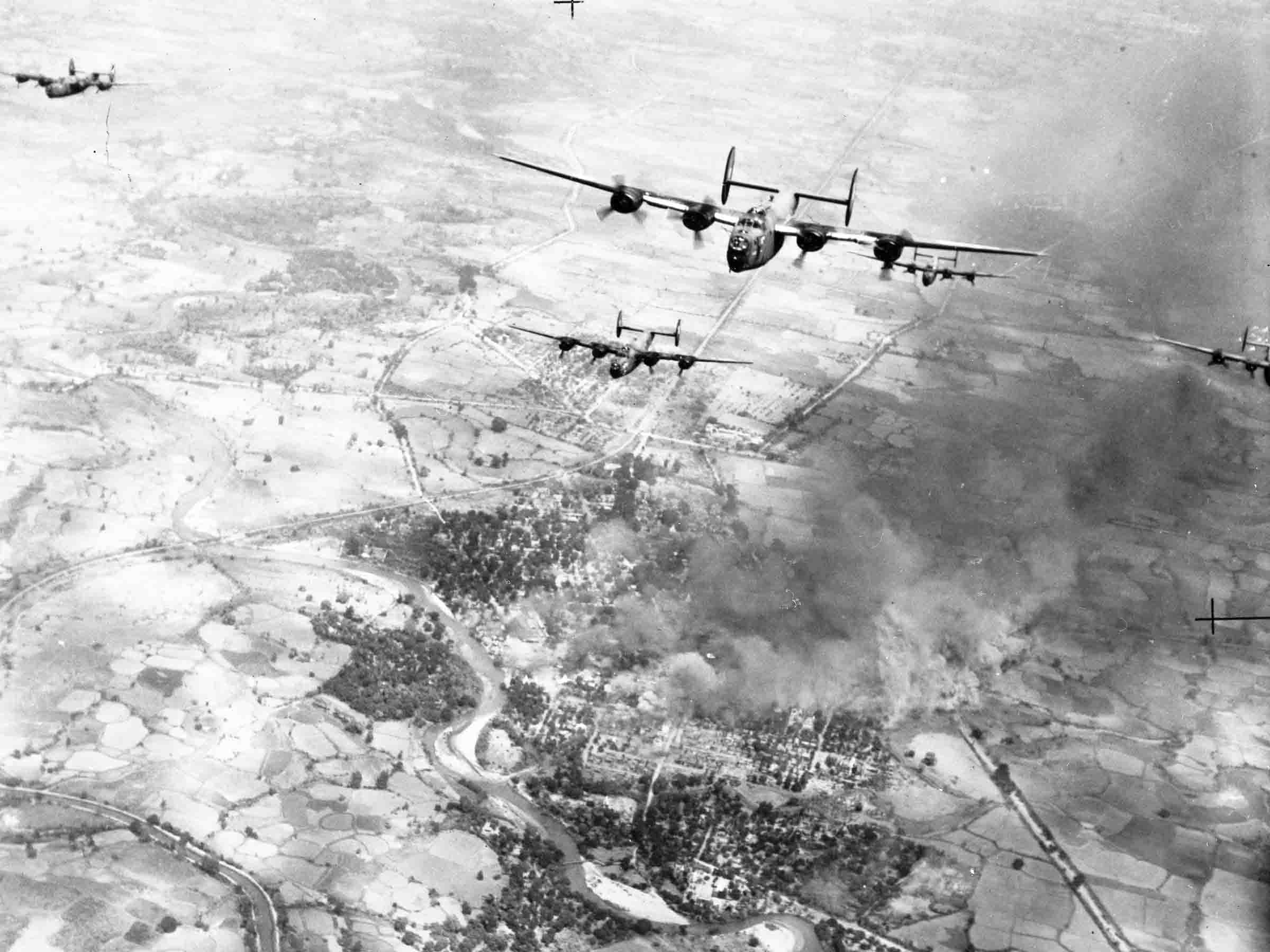 The four engine long range Consolidated Liberator bomber allowed the RAF to establish a strategic bomber force which could attack Japanese targets throughout the region. Liberators were used in a bombing campaign against the transport network in Burma and Indochina as well as in an anti-shipping capacity, and for supply dropping to special forces on the ground.

The region’s geography consisted of high mountain ranges cut by wide rivers, with most of the land covered by thick jungle. This combined to make logistical support of large armies a nightmare. Transport aircraft provided an indispensable service supplying the Allied forces in the field. Whether supplying the necessities of life and war to the conventional ground forces or to the Chindits operating many miles behind the front line, the transport aircraft became the airborne crux of the war in the Far East. The growing familiarity with air transport occasionally caused problems; British ground forces would sometimes ask for airborne operations which could actually be carried out more effectively by ground transport. 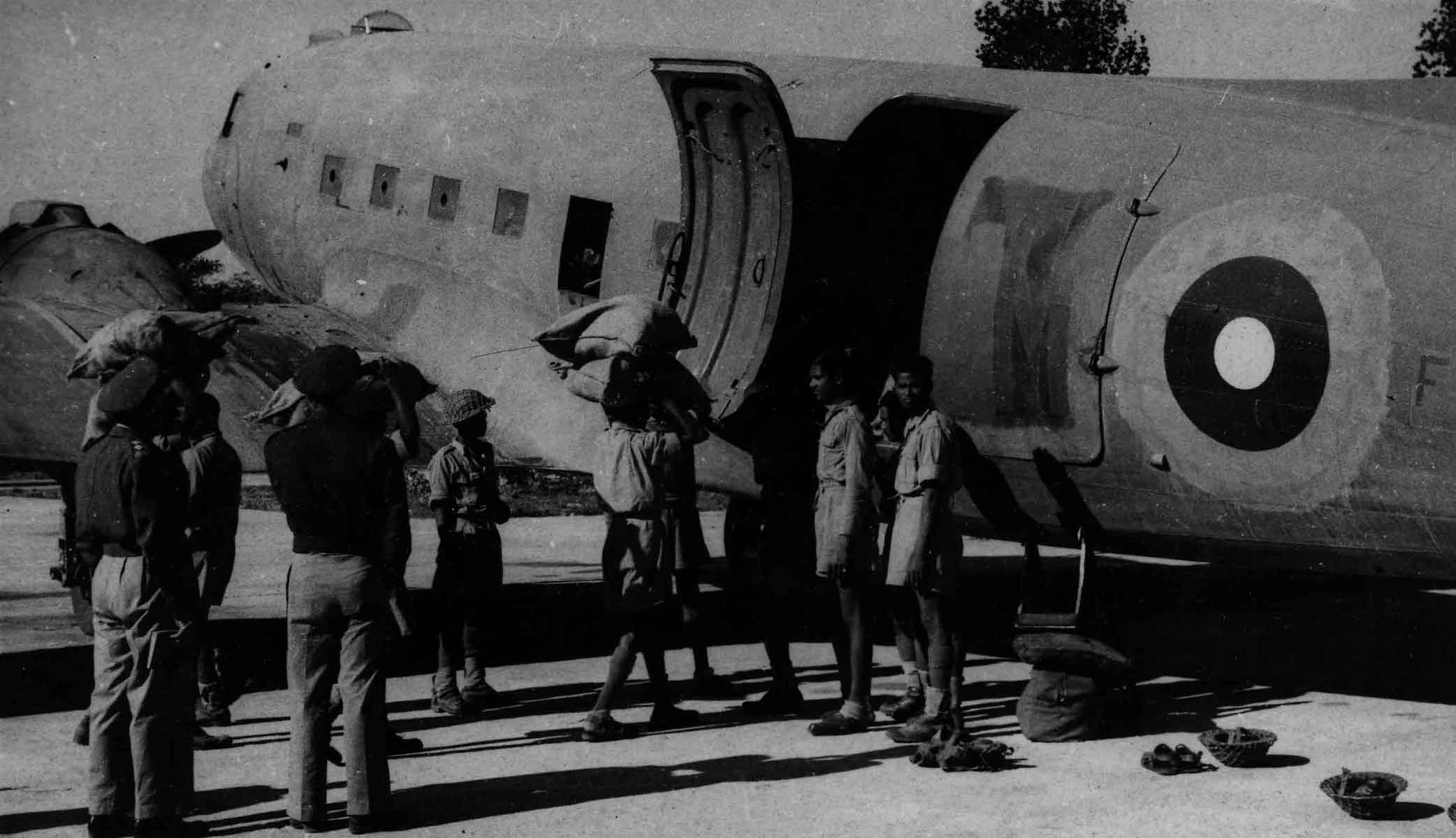 Although the heavy transport aircraft such as the Curtiss Commando and Douglas Dakota became everyday sights in the last two years of the campaign, one should not forget the vital role played by light aircraft, such as the Stinson L-1 Vigilant and L-5 Sentinel operating into and out of some of the most restricted air strips. Their ability to bring in mail and other morale boosting material and to take out wounded soldiers made them a vital tool in the war effort. Although only used by the Americans it was during this campaign that the helicopter was first used for casualty evacuation.

The maritime air war in the Far East began with Vickers Vildebeest biplane torpedo bombers still in service alongside RAAF Lockheed Hudson general reconnaissance aircraft. They were no match for the Japanese and were soon overwhelmed. The remnants at first moved to Singapore. However when that was about to fall to the Japanese in early 1942 they moved again to the Dutch East Indies. Three Hudsons managed to reach Australia but few personnel escaped death or captivity.

Flying boats were scarce. No. 230 Squadron had been withdrawn in 1940 for service in the Middle East and all that was available in December 1941 in the Far East were three Consolidated Catalinas from No. 230 Squadron. 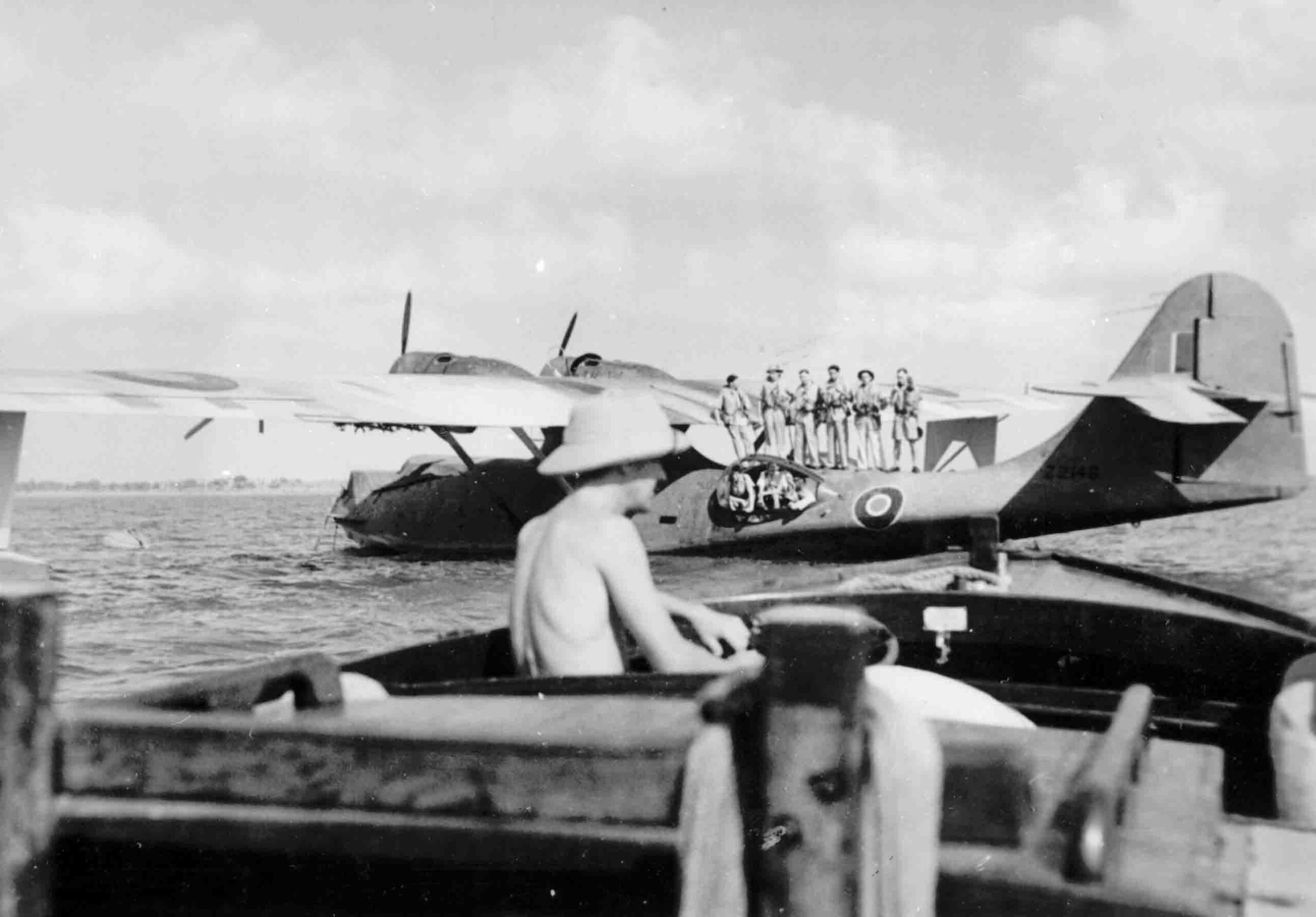 From 1942-1944 maritime aircraft flew many hundreds of thousands of miles covering the 2.5 million square miles of Indian Ocean ( twice the size of the North Atlantic) keeping a lookout primarily for German and Japanese submarines. The aircraft operated from India, Ceylon and bases in the Maldives, Diego Garcia and the Seychelles, paying visits to ever more remote islands. In all that time they did not sink any enemy submarines but did save over 1000 survivors from Allied ships sunk by enemy torpedoes.

At the end of 1944 they went on the offensive and, with the assistance from Consolidated Liberators and Bristol Beaufighters, began attacks on enemy coastal shipping and a programme of mining enemy waters. The majority of flying boats in the area were Catalinas, but two squadrons of Short Sunderland aircraft were also there and it fell to these to undertake one of the more unusual missions-operating from a lake behind Japanese lines two Sunderland flying boats were involved in the air evacuation of wounded Chindits.

At the beginning of hostilities reconnaissance resources were scarce, and that which was undertaken used existing aircraft such as Bristol Blenheims and Brewster Buffalos. As Allied forces retreated through Burma American Volunteer Group Curtiss P-40 Warhawks and Burma Volunteers Air Force Tiger Moths assisted the few RAF Hawker Hurricanes and Lockheed Hudsons in the region with these duties.

The two RAF units most closely associated with photographic reconnaissance in the Far East were Nos. 681 and 684 Squadrons. No. 681 Squadron began operations with Spitfires, Hurricanes and North American Mitchells. Later it received a number of Mosquitos, but by December 1943 the squadron had standardised on Spitfires. They specialised in obtaining photographic coverage of enemy ports and railways in the South East Asia region. No. 684 Squadron on the other hand operated twin engine Mitchells, until 1945, and Mosquitos until September 1946, when they too received Spitfires. This unit provided longer-range coverage over Burma, Thailand and Malaya. 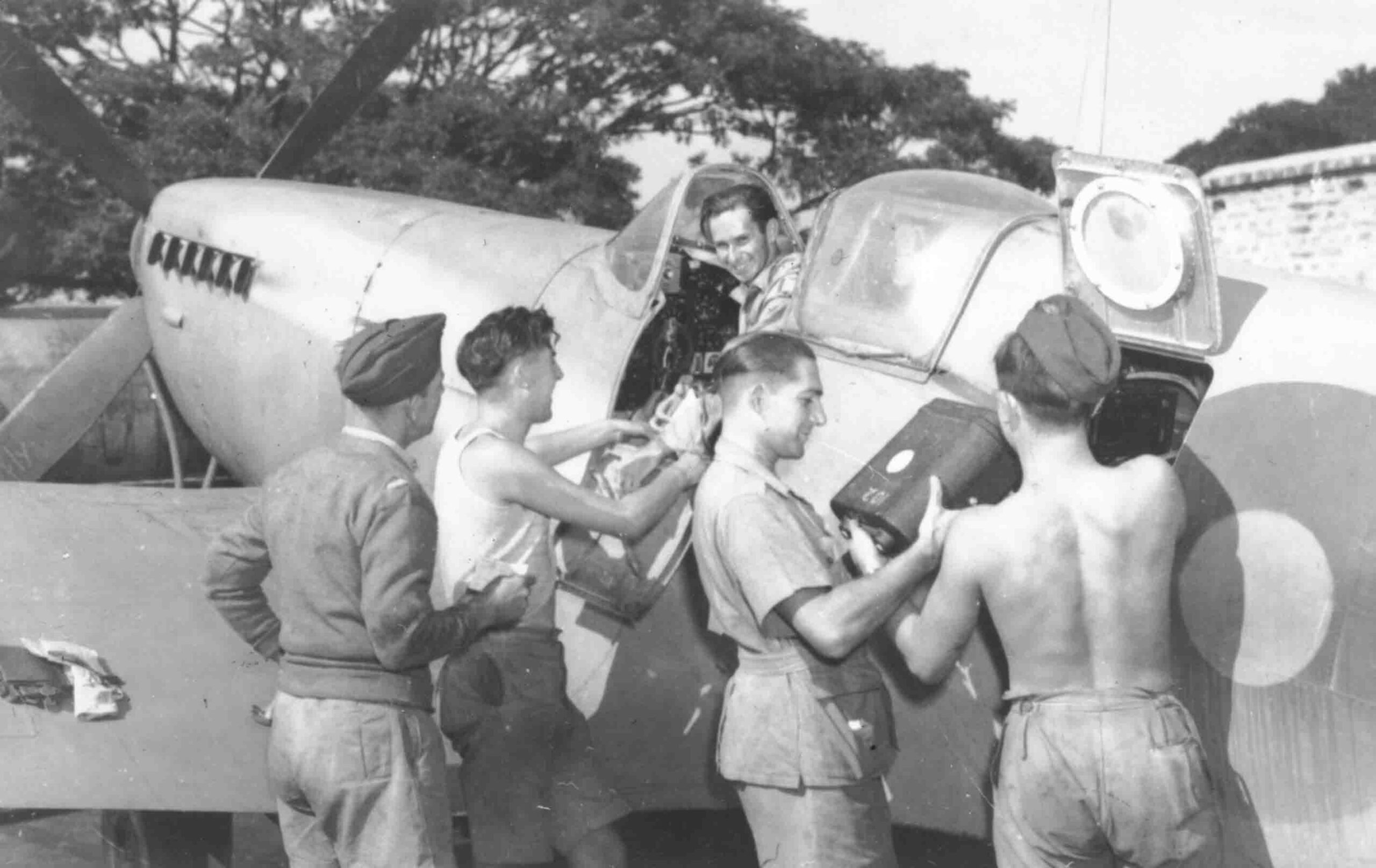 The British were however not alone and the Americans also supplied reconnaissance capability in the area. They operated the North American B-25, Consolidated F-7 (a B-24 variant), Lockheed F-4 and F-5 (P-38 variants), North American F-6 (a P-51 variant) and most spectacularly of all the Boeing F-13 (a B-29 variant).