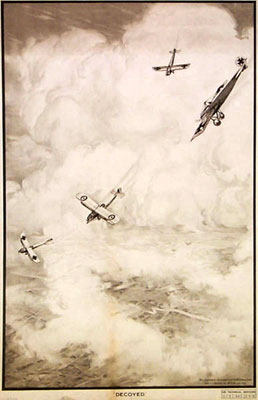 “The Rumpler with the green tail was an old menace in the sky well known to Biggles. Of a slow, obsolescent type, it looked ‘easy meat’ to the beginner unaware of its sinister purpose, which was to act as a tempting bait to lure just such pilots beneath the waiting Spandau guns of the shark-like Albatrosses.”

“Such death-traps were fairly common, but they no longer deceived him for an instant. “Never go down after a Hun,” was the warning dinned into the ears of every new arrival in France by those who knew the pitfalls that awaited the unwary – alas, how often in vain.”