“While we were still over the Channel on the way in we caught sight of a small pin-point of white light in front of us… as we drew closer to our target the light gradually became larger until suddenly it dawned on us: we were looking at the burning city of Coventry.” 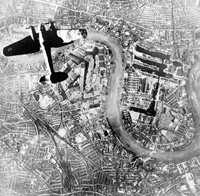 Germany launched its bombing raids on British cities – the Blitz – on 7th September 1940 – ‘Black Saturday’, beginning with the London Docks. During this first phase of the Blitz, raids took place both day and night. German bombers attacked London every night but one between mid-September and mid-November. Birmingham and Bristol were attacked in mid-October.

From mid-November 1940 to February 1941, the Luftwaffe attacked industrial and port cities. This second phase began on 14th/15th November 1940 when the Luftwaffe made a devastating 12-hour bombing raid on Coventry. Three-quarters of the city centre was devastated, including the ancient cathedral. The Germans coined a phrase – ‘to Coventrate’ – to describe the intense destruction. Other targets included Birmingham, Bristol, 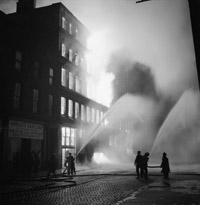 In February 1941 Hitler issued orders to concentrate on port facilities. Between 19 February and 12 May, Germany mounted 51 attacks against those targets, with only seven directed against inland metropolitan areas including London, Birmingham, and Coventry.

The government feared that aerial bombardment could destroy civilian morale and perhaps in Coventry those fears were put to their sternest test; in the immediate aftermath of the attack mass graves were dug (over 560 people died) and there was some looting. However within weeks the city and its factories revived and no where did sustained loss of morale occur. 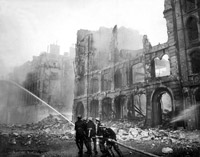 Buildings burning in Manchester after a German air raid on the night of 3 December 1940.

Firemen at work in a bomb-damaged street in London, after a Saturday night raid, 1941.