The 1960s were a time of increasing freedom in Czechoslovakia. Although the Communist Party of Czechoslovakia remained the governing party. One of the better manifestations of this era was the first attempt at rehabilitation of former airmen for the wrongs perpetrated in the forties and fifties. Some rehabilitations were at least completed, taking into considering the possibilities, even though they could not, by far, make up for the damage done, whereas others just faded away.

Invitation for Richarda HUSMANN, former member of the 311 (Czechoslovak) Squadron, and the 3rd Czechoslovak Battle Aviation Regiment in the USSR, to the awarding of honorary titles of “Merited Military Pilot of the Czechoslovakia”. The ceremony took place on 8th November 1968 (three months after the occupation by the forces of the Warsaw Pact) in the hall of the Military Politics Academy of Klement Gottwald. Archive of Zuzana Husmannová.

Also, at that time, articles exploring the theme of our resistance in the RAF, began appearing. Lectures were held with former members of the RAF, even in military units. 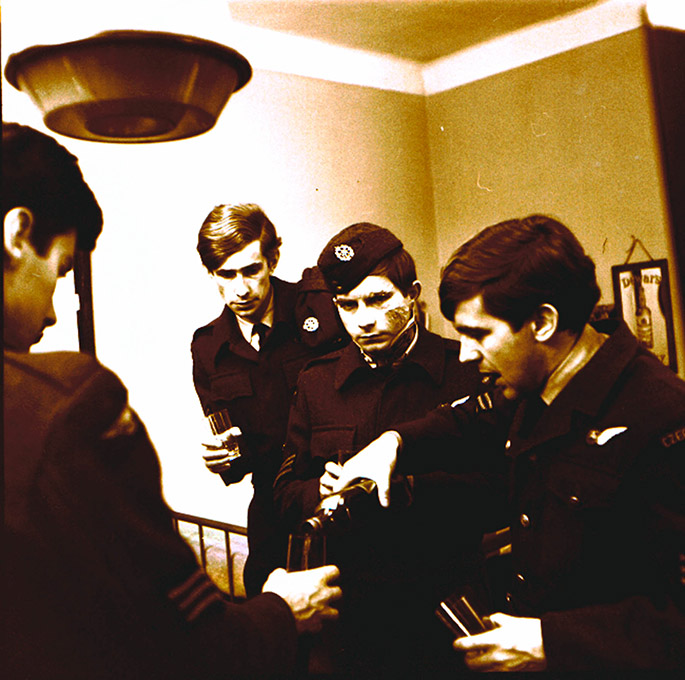 In 1968, an equally successful film of the same name was made based on this book, and which became the first Czechoslovak film about the Czechoslovak airmen with the RAF. Many war veterans participated in the shooting.

The photo shows the scene of the injured airman’s return to his crew. On the photograph: Josef VÁŠA, Jirí KAPLICKÝ (later a well-known architect), Jirí BEDNÁR and Jirí HRZÁN. Author of the photo: Zdenek Dukát.

However, after 21st August 1968, when Warsaw Pact troops began to occupy Czechoslovakia, it was the end of any other similar efforts and activities. Only in the 1980s did former Czechoslovak RAF members begin to be commemorated. This was not, however, to any great extent, since the communist regime still endured in Czechoslovakia, but at least several books were published on the subject. And in magazine for youth people “ABC” was issued a paper cutout of spitfire fighter.

Scene from the movie “Fists in the dark”. Vilda JAKŠ as played by Marek VAŠUT attacks at a film version of Kurt SCHALLER. National Film Archive. Author of photo: Miloš Schniedberger.

On 17th November 1989 a series of events commenced, which today we call the “Velvet Revolution”, the result of which was the fall of the Communist Party of the Czech Republic and the return of democracy. The Rehabilitations commenced in the 1990s were not just formalities. Their goal was to compensate the injured war veterans as much as possible for what they had suffered.

In the 90s dozens of memorial books began to be published on this topic, and the memory of the RAF began to appear in other works of culture, such as music. The group Taxmeni sings about them in several songs, such as “Wrong place for landing,” “Riders in the Sky”, and in the song “Heaven” Anna K, and the country band called Pacific titled one of their songs “RAF”. In 1991, the film “The cemetery for foreigners”, was shot, and ten years later the film “Dark Blue World”, inspired by the stories of many former pilots, was made and dozens of documentaries have been shot. Also, many lectures were held, at schools and for the public.

At the same time, the army also returned to the traditions of Czechoslovak units of the Second World War. Today, for example, the 22nd Helicopter Base bears the honorary title “Biscay”, i.e. a similar name, which the Aviation Regiment 24 had for a short time in 1948, created from one of the squadrons of the former 311 (Czechoslovak) Squadron, whose liberators operated just above the Bay of Biscay. Similarly, this history is also referenced by the 21st Tactical Air Force Base, some of whose flights have as their patrons former members of the RAF. The 213th Training Squadron is called “Šiškova” after Alois ŠIŠKA, a former pilot with 311 (Czechoslovak) Squadron. At the same time, annual visits of the members of the Association of Airmen of a Liberated Czechoslovakia from England, which were organized by the Ministry of Defence of the Czech Republic. 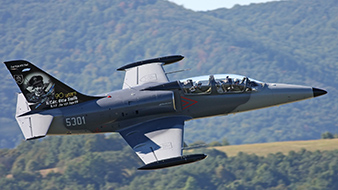 The same goes for Slovakia The Mixed Wing based at the Sliac – Tri Duby airbase is named after Otto SMIK, DFC. The airbase from the year 2002 bears SMIK’s name. Archive of Mixed Wing in name of Otto Smik.

Czechoslovak members of the RAF and women of the WAAF are also actively commemorated by several individuals, respectively, living history groups. The oldest such group in the Czech Republic and Central Europe is the living history group of the 276th Sqdn. (reenacted) RAF. This theme is actively commemorated by several members of KVH Forty-Five Brno, and also, withs theirs replica of a Spitfire aircraft, the Czech Spitfire Club. Other active organizations include the Klub historie letectví – Jindrichuv Hradec, which has long been organizing meetings of war veterans, and also organizes expeditions to sites associated with our airmen, and which is the author of the monument to airmen in Jindrichuv Hradec.

Back of portrait photograph of Karel KNAIFL. This photo was intended for publication in the magazine Zár, journal of the District Communist Party Committee and District Council in Pardubice. Interesting paradox – former political prisoner in the communist press. Archive of Jirina Knaiflová.

Film “Cemetery for Foreigners”. Josef DVORÁK protests in the courtyard of the Prague Castle, the seat of Czechoslovak and Czech presidents, against the persecution of his friend. Archive of Czech Television. Author of the photo: Pavla Cerná. 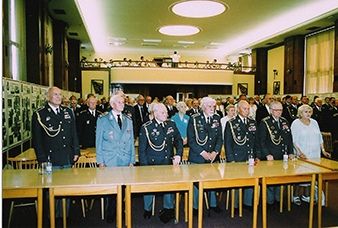 “Land Gone Wild”. It deals with the postwar fate of former airman of the RAF Antonín MADERA. The photo captures his arrival in his native municipality. The explosion of the house of his birth at the beginning of the series lets him know he’s not welcome there. Archive of Czech Television. Author of the photo: Pavla Cerná.

“Land Gone Wild”. Shows Antonín MADERA forced to work in the mines by the communist regime. The series attempts to capture the phases of his life as the Czechoslovak airmen experienced them. Archive of Czech Television. Author of the photo: Pavla Cerná. 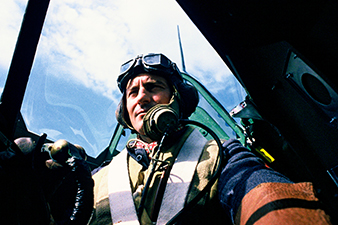 Photo from the film by Jan SVERÁK, “Dark Blue World”. Ondrej VETCHÝ as pilot František SLÁMA. The film captures not only the actions in the RAF, but also the postwar imprisonment of war veterans. The film can gives you an idea of what the forced labor camp at Mírov was like, among other things. TMAVOMODRÝ SVET / DARK BLUE WORLD, feature film directed by Jan Sverák (2000). 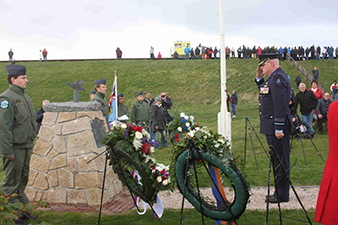 Photograph from the unveiling of the memorial to the crew of the KX−B aircraft that made an emergency landing on the cusp of the years 1941/1942 in the North Sea. This story is told in the book by Alois ŠIŠKA, “Flying for Freedom” respectively “KX−B neodpovídá”. Petten, Netherlands, 17th October 2012. Archive of Milan Simr.