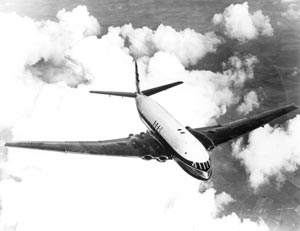 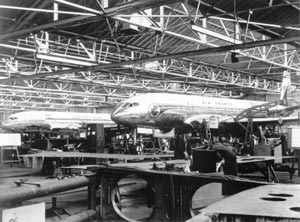 On 2 May 1952 the de Havilland Comet entered service with BOAC as the first commercial jet
airliner. This marked a new era in civil aviation and left other aeroplane manufacturers years behind. The new aircraft could carry 36 passengers at a cruising speed of 720 km/h (450 mph) over a
distance of 4000 km (2500 miles). BOAC became the envy of world airlines by operating the first jet
fleet.

In order to carry the maximum amount of passengers and freight, the weight of the aircraft and fuel had to be kept to a minimum. The construction techniques were a mixture of old and new: rivets were used but also glued together using a technique known as Redux bonding.

This technique had been pioneered by de Havilland in the Hornet and Dove aircraft, to reduce the weight of the structure whilst keeping the strength.