A letter from Air Commodore S.O. Bufton, the Director of Bombing Operations, to Air Vice-Marshal N.H. Bottomley, the Assistant Chief of the Air Staff (Operations), regarding the damaged caused to the three dams attacked during the raid. 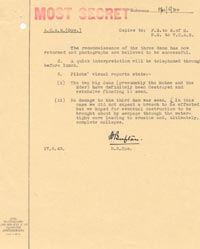 The assessments given in the letter were confirmed by the photographic evidence gathered by the photo reconnaissance Spitfires of 542 Squadron.