All the same buttons

In 1917 the first uniformed women’s services were established. For the majority of duties undertaken by Women’s Army Auxiliary Corps (WAAC) and Women’s Royal Naval Service (WRNS) personnel, for example, there was little need for specialised working clothes and a coat-frock was worn.

For duties requiring that the uniform be protected such as cooking, aircraft doping or servicing, wrap-around, loose cotton overall coats were provided. The driving of motor vehicles also required women to be provided with breeches for use on motorcycles and heavy outer coats, hats and gloves for protection against the weather. 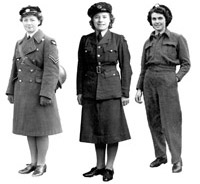 During the Second World War those serving with the Women’s Auxiliary Air Force were proud to wear their Air Force blue female uniform. This proved rather impractical however for the wide variety of work being undertaken which ranged from hefty and strenuous work on barrage balloon sites to delicate and precise instrument repairs.

The women were soon issued with overall suits, dust and kitchen coats, slacks and other working clothing to wear over or instead of their uniforms. 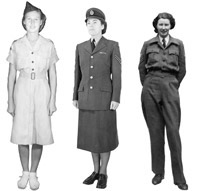 It was only from the mid 1950s that women’s uniform started to take fashion into account. Softer lines, a less military appearance, more tailoring, an Air Hostess style cap, the disappearance of opaque stockings and the optional use of Court shoes all contributed to this trend. 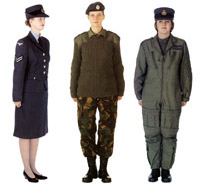 Following the full integration of women into the Royal Air Force in 1994 and the expectation that women would be employed in the same Trades as men, this trend has been reversed to a large degree. Disruptive Pattern Material Combat clothing has imposed upon all members of the Service an anonymity, equality and functionality which takes no account of gender.