Aircraftwoman 2nd Class Morfydd Gronland was stationed at RAF Scampton at the time of Operation CHASTISE.

In this extract from her memoir of WAAF service, ACW2 Gronland relates the emotions felt around the station while they waited for the return of the surviving aircrew.

“We stood silently until the final sounds of their engines died away. Then we all drifted away to our duties.

There was no sleep for anyone that night, our hearts and minds were in those Planes. We Waafs just sat waiting, we had laid out the tables and a hot meal would be ready on their return. 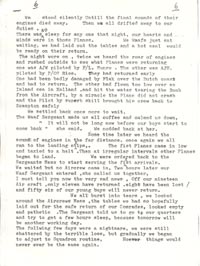 The night wore on, twice we heard the roar of engines and rushed outside to see what Planes were returning. One was AJW piloted by F/L. Munro. The other was AJH piloted by P/O? Rice. They had returned early. One had been badly damaged by flak over the Dutch coast and had to return. The other had flown too low over an inland sea in Holland, and hit the water tearing the bomb from the aircraft, by a miracle the plane did not crash and the pilot by superb skill brought his crew back to Scampton safely

We settled back once more to wait. The WAAF Sergeant made us all coffee and calmed us down,
“It will not be long now before our boys start to come back” she said. We nodded back at her.

Some time later we heard the sound of engines in the far distance. Once again we all ran to the landing strips. The first planes came in low and taxied to a halt .Then at irregular intervals other planes began to land. We were ordered back to the Sergeants Mess to start serving the first arrivals. We waited but no Aircrew came in, Two hours later our WAAF Sergeant entered, she called us together, I must tell you now the very sad news, Off our nineteen aircraft, only eleven have returned. Eight have been lost and fifty-six of our young boys will never return.

We all burst into tears, we looked around the Aircrews Mess ,the tables we had so hopefully laid out for the safe return of our comrades, looked empty and pathetic .The Sergeant told us to go to our quarters and try to get a few hours sleep, because tomorrow will be another working day.

The following few days were a nightmare, we were still shattered by the terrible loss, but gradually we began to adjust to Squadron routine. However things would never ever be the same again.”