“How horrible, fantastic, incredible it is that we should be digging trenches and trying on gas-masks here because of a quarrel in a far-away country between people of whom we know nothing!”

German troops marched back into the Rhineland in March 1936. Austria was annexed on 12 March 1938. Hitler then turned his attention to Czechoslovakia and in particular the Sudetenland region; this was inhabited by a sizable German minority. German preparations for occupation in May 1938 caused Britain, France and Russia to threaten a military response. 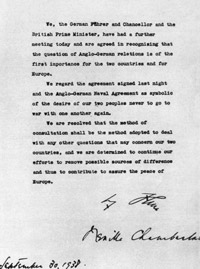 On this occasion Hitler backed down but British Prime Minister, Neville Chamberlain, then became a prime mover in appeasing Germany and an attempt to avert another European War.

By the end of September 1938 Chamberlain believed he had won “peace in our time” and this was met with relief in Britain and France and it certainly helped buy another year for British re-armament. At first he was hailed as a hero but as Hitler’s duplicity became clear his reputation was forever tarnished by the Munich Agreement.

Within a month of Hitler’s promise that the Sudetenland was “his last territorial demand in Europe”, he issued secret orders to the German Army to prepare to seize of the rest of Czechoslovakia.

By putting an end to Czechoslovakia’s twenty year existence as an independent state Hitler had torn up another clause of the humiliating 1919 Versailles peace treaty. He had also shown the folly of Britain’s policy of ‘appeasement’ towards Hitler.

British Prime Minister, Neville Chamberlain strived for a peaceful settlement. He met Hitler in September 1938, after which Britain and France conferred and withdrew their promise of military support for the Czechs. Hitler wanted immediate occupation but Chamberlain refused and the Czechs mobilised their forces. War seemed imminent. 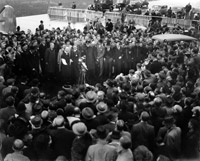 Chamberlain broke the deadlock by suggesting a final conference with Italy as mediator. Britain (Chamberlain), France (Daladier), Germany (Hitler) and Italy (Mussolini and Foreign Minister Count Ciano) met at Munich to decide Czechoslovakia’s future: Czechoslovakia was not consulted. Britain and France backed down and agreed to German occupation of the Sudetenland in return for Hitler’s guarantee that this was his last territorial demand in Europe.

“This morning I had another talk with the German Chancellor, Herr Hitler, and here is the paper which bears his name upon it as well as mine… We regard the agreement signed last night and the Anglo-German Naval Agreement, as symbolic of the desire of our two peoples never to go to war with one another again.”