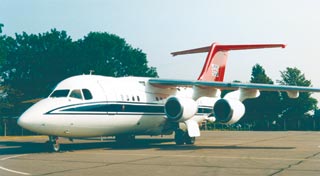 Two BAe146s replaced the Andovers in 1986, initially leased from the manufacturer. A new aircraft was later purchased for The Queen’s Flight.
The RAF Benson based Queen’s Flight was merged with the RAF’s VIP communications squadron in 1998 and the aircraft are now flown by No.32 (The Royal) Squadron, based at RAF Northolt.