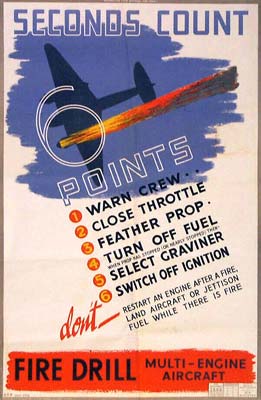 An engine fire in flight demands prompt action by the aircrew. If it is not put out quickly the fire can spread and cause damage to the aircraft’s structure and controls, resulting in the loss of the aircraft and putting the lives of passengers and crew at risk. Taking the right action without panic will often enable the aircraft to fly on safely and get home using its remaining engine(s). Here crews are reminded of the six steps to take – and the correct order in which to take them – in the event of an engine fire.

Warning the rest of the crew allowed them to prepare for an emergency landing or to be ready to bale out if the fire could not be extinguished. Shutting down the burning engine stopped petrol feeding the flames and feathering the propeller blades helped to compensate for the loss of power by reducing drag. Each engine had its own fire extinguisher (known as a Graviner because of the maker’s name), so ‘Select Graviner’ meant activate the correct extinguisher for the engine, which was on fire, e.g. port or starboard, inner or outer. Practising this drill helped crews react swiftly in a real emergency.