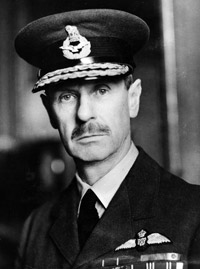 “A difficult man, a self-opinionated man, a most determined man, and a man who knew more than anybody about all aspects of aerial warfare.”

Air Chief Marshal Dowding is regarded as the architect of victory in the Battle of Britain.

Dowding began his military career in the artillery but in 1913 he took the opportunity to learn to fly at Brooklands and gained his RFC wings. During the First World War he commanded No 16 Squadron 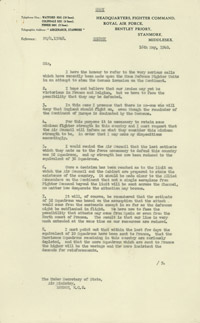 before taking over the Ninth (Headquarters) Wing during the Battle of the Somme. Differences of opinion with Trenchard saw him return to the United Kingdom to training duties.

After an influential spell as Air Member for Research and Development after the war he seemed a natural choice to lead Fighter Command when it was set up in July 1936. He spent the remaining years of peace preparing it for war.

Dowding had originally been told he would retire in June 1939 but his retirement date was postponed several times. Although he did not have day to day control of the air defences, this lay in the hands of his four Group Commanders, his management of these subordinates during this crucial period of the Battles of France and Britain clearly made him the man right man in the right job and certainly one of the most important RAF commanders. 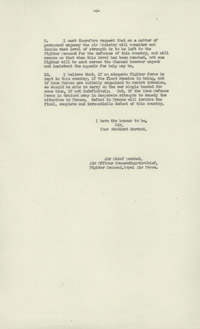 Dowding was criticised by some for not using the aggressive “Big Wing” tactics favoured by people like AVM Leigh-Mallory and Sqn Ldr Douglas Bader. Whether large formations of aircraft would really have been more effective is still in dispute.

To some he was considered dour, stubborn, obstinate and uncooperative and this made him a number of influential enemies. Within weeks of the end of the Battle Dowding had been forced to relinquish his position. He finally retired in July 1942.

The letter that changed everything

Dowding outlines to the Air Ministry the reasons why no more fighter re-enforcements should be sent to France otherwise Britain’s own defences would be compromised. He believed it to be a waste of aircraft and pilots. This is the most important decision was to build up the home fighter defence. He fought for this In the face of fierce political opposition.

Listen to our podcast ‘Dowding – Architect of Victory’