Following the end of the First World War, millions returned and were
demobilised without any support from the state. Men were left without
work and little money or support. These millions included men who had
returned from the war with terrible injuries, along with the families
who had lost their male family members. At first the ex-servicemen
formed a number of independent organisations to provide support and
welfare. 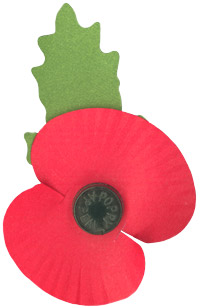 The British Legion was formed in 1921, when four national
organisations of ex-servicemen were united. Their aims were to support
the men who had survived the war and to help the families of those who
did not return. It was in this year that the first official Poppy Day
was held; an event that continues to this day. In 1971 The British
Legion became The Royal British Legion.

Since the first official Poppy Day in 1921, the Poppy has become
an international symbol of Remembrance across the United Kingdom, in
parts of the Commonwealth as well as in other parts of the world.

Today, the Royal British Legion continues to offer a number of
services to personnel who have served in the armed forces, have been
injured in campaigns, as well as offering general support to families
who have lost a loved one. By purchasing a poppy you are helping the
Royal British Legion to raise money to maintain this support.