“Since England, in spite of her hopeless military situation, shows no signs of being ready to come to a compromise, I have decided to prepare a landing operation against England, and, if necessary, to carry it out”

After Germany’s defeat of France and the Low Countries in the spring of 1940, Hitler believed that Britain would ask for terms but if not then the country could be successfully invaded. 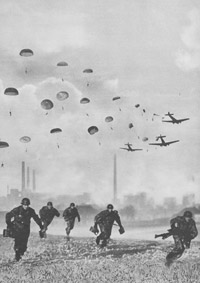 Serious planning work began for Operation Seelöwe (Sealion), in July 1940, following Britain’s rejection of Hitler’s final offer of a negotiated peace settlement. Hitler wanted an immediate invasion to prevent the British army recovering from its defeat in France. All this was to be completed by 10 August 1940. The assembly of a large invasion fleet of barges, tugs, trawlers and merchant ships was begun at Calais and Rotterdam.

In August, Göering launched the Luftwaffe’s campaign to destroy the RAF and win control of English Channel and the air over southern England. This would enable the German navy to provide the invasion fleet with the maximum protection. Once reinforcements had been landed the advance northwards was to begin but London would have been bypassed until resistance in the rest of Britain had collapsed.

Several postponements took place through into September on the grounds that the essential conditions did not exist. The Luftwaffe’s failure to achieve air supremacy in the Battle of Britain forced Hitler to postpone Operation Sealion indefinitely. The operation was never formally cancelled.

No one knows whether Sealion would have succeeded or not had it been launched. Without air supremacy and command of the sea the project could not go ahead; if both had been achieved then it may not have even been necessary.