The Rise of the Nazi Party 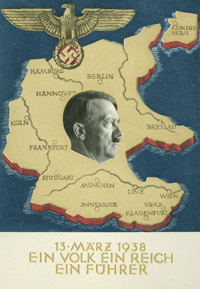 The harsh terms dictated by the Allies in the Treaty of Versailles caused the German people much anguish. This proved a fertile breeding ground for radical political parties. One such small and obscure group was the Nationalsozialistische Deutsche Arbeiterpartei (National Socialist German Workers’ Party). Formed in 1919, one of its early members was an Army Corporal Adolph Hitler. His gift for oratory soon propelled him into the role of leader. (Image © Collinson Collection)

The Nazis’ first attempt to seize power, in the 1923 Munich uprising, ended in failure and Hitler’s brief imprisonment. During the 1920s the Nazi Party extended throughout Germany and industrialists provided financial support. Nazi rallies and newspapers spread party propaganda, while gangs of SA stormtroopers intimidated opponents.

Unification of all the German peoples in Europe was Hitler’s first ambition after coming to power. Not only did he want to regain the territory lost after Germany’s defeat in the First World War but he also wanted to unite Germany and Austria, his country of birth.

In six short years Hitler had achieved his basic aims for a Greater Germany. 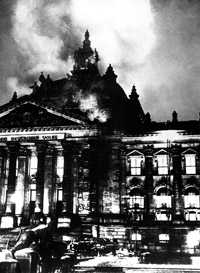 When the German President Paul von Hindenburg died in 1934 this removed the last obstacle to Hitler establishing himself as Fuhrer (Leader) of the new Third Reich (Empire).

In 1935 Hitler had his first success when the important coal mining Saar Region voted to return to Germany. Re-armament had begun and the Army had been strengthened Hitler returned troops to the Rhineland gambling correctly that France would not oppose him.

After an unsuccessful Nazi coup in Austria in 1934 Hitler encouraged the build-up of the Nazi Party, while at the same time overcoming Italian opposition to the German take-over of Austria.

In March 1938 Hitler delivered his demands for the lifting of the ban on the Austrian Nazi Party and Nazi representation in the Austrian cabinet.

When the Austrian Chancellor tried to frustrate Hitler’s plans by ordering a referendum on the ‘Anschluss’ (union with Germany) there were Nazi uprisings and German troops occupied the country.