The Royal Flying Corps and the Royal Naval Air Service suffered
many casualties during the fighting. In the event of death, the first
contact made with the next of kin was a telegram informing them of the
death of their family member. 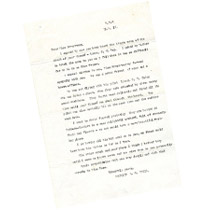 Letters would be sent from the Officer Commanding the casualty’s
immediate unit offering sympathy and heartfelt wishes to those involved.
Many of these letters would end with a comment on the bravery shown by
the individual and of pride at his actions.

Sometimes colleagues would send letters of commiseration. These
letters were not just ‘standard messages’, they were personal and
poignant – after all these were friends. An official letter would follow
shortly after with a message of condolence on behalf of the King and
Queen. 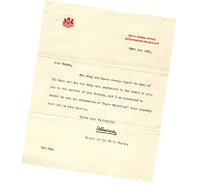 A casualty plaque, sometimes called a ‘Widow’s Penny’, was then
sent, along with a casualty scroll as a lasting personal memorial for
the family.

The ‘war to end all wars’ left thousands of families without
fathers, brothers, husbands and sons but sadly this would not to be the
last conflict to do so.

If you would like to contribute to our online Book of Remembrance please
write a short message and forward it with a photograph of the person
who you are commemorating by clicking on the link directly below. This
message and photograph, once posted by the Museum, will be viewed by
visitors to this online exhibition. If you do not have an electronic
version of the photograph you would like to use, don’t worry, we will
place an image of a Poppy next to the words that you write.

Write in our Book of Remembrance