When he was a child Richard Branson’s father and mother were close family friends of Douglas Bader. Accordingly, Douglas would often look after the young Richard Branson whilst his parents attended social occasions. 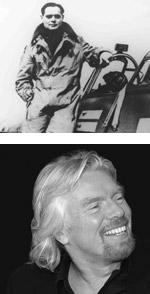 In this podcast to commemorate the Centenary of Douglas Bader’s birth on 21st February, Sir Richard Branson narrates the story of one of the most famous fighter pilots in the history of the RAF and gives his own insight into the great man.

The Royal Air Force Museum Podcast Series will present a monthly podcast
on a variety of subjects, examining in detail elements of the history
of the Royal Air Force and our sites at London, Cosford and Stafford.