“…In general the bravery and heroism of the Polish Army merits great respect.” 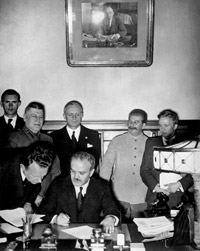 The First World War peace settlement saw Germany loose territory, in the east, to the new states of Czechoslovakia and Poland. Germany felt humiliated by the treaty terms and bitterly resented these losses. Hitler capitalised on this during his rise to power.

In 1938 he began a diplomatic campaign against both nations. By early 1939 his efforts against Poland had got nowhere and in late March he informed the leaders of the German armed forces that the ‘Polish question’ would have to be settled by force. 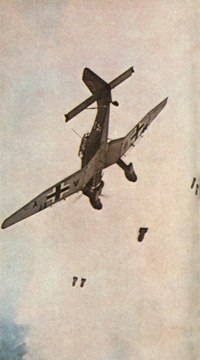 Although the British government announced in March that it would guarantee Polish security and maintain the free port status of Danzig Hitler’s experience of the western nations, during the 1938 Munich Crisis, convinced him that any support they might offer would be symbolic and ineffectual.

Stalin began to consider a treaty with Germany

Having observed the weakness of the West Soviet leader Stalin began to consider a treaty with Germany.

Following informal discussions in the summer the world was stunned on the 25 August when it was announced that Germany and the Soviet Union had signed a non-aggression pact.

The last obstacle had now been removed to the invasion of Poland.

At 0400hrs on 1st September the German battleship Schleswig-Holstein opened fire on the Polish garrison on Westerplatte near Danzig; the Second World War had begun.

Using revolutionary ‘Blitzkrieg’ tactics, German forces, led by tanks and supported by bombers, advanced rapidly. The Polish army fought bravely but it was no match for the stronger and better-equipped Germans. With only a few tanks that could match those of the German armoured divisions, and outnumbered three to two in infantry and artillery, Polish casualties were heavy and many more were captured. Within a week German tanks had reached the outskirts of Warsaw but fierce street fighting checked the advance and the city did not fall until 27th September.

On 17th September Russian forces attacked Poland from the east and by 6th October the last major Polish fighting unit had surrendered. The Polish campaign had ended. Meanwhile France and Britain waited unprepared and unable to help, demonstrating the ineffectiveness of the Anglo-French alliance with Poland.

Some of the Polish Pilots who escaped German Forces to form 303 Squadron, RAF

One of the wartime myths was that the Polish Air Force was destroyed by the Luftwaffe while it was still on the ground, giving the Germans complete air superiority by the third day.

The German Air Force ruled Polish skies simply because it was five times bigger and the fact that the majority of its aircraft were much more modern and capable that anything the Poles could deploy.