“They also serve who only stand and wait.”

The significance of other commands in the Battle of Britain is often overlooked. 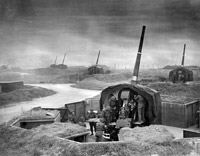 The Army’s Anti-Aircraft Command manned around 4000 searchlights, 1280 medium, and 517 light anti-aircraft guns in July 1940. Despite being significantly under their recommended numbers the guns claimed approximately 300 Luftwaffe aircraft shot down during the Battle.

which in July 1940 consisted of 1466 balloons, including some 450 over London. The balloons played a significant role in Britain’s anti-aircraft “umbrella” defences as they restricted the freedom of Luftwaffe aircraft often forcing them to fly different routes to a particular target or at higher altitudes and therefore within the range of anti-aircraft artillery. Along with the anti-aircraft guns their highly visible presence boosted the morale of the civilian population. 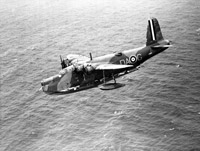 RAF Coastal Command’s maritime reconnaissance patrols maintained a continuous watch over German preparations for the invasion of Britain and provided a defence of British merchant shipping from attack by German aircraft, submarines and surface vessels. 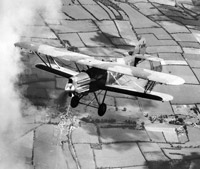 During the height of the invasion scare there were outlandish ideas to counter the German forces – some, such as airborne gas attacks, more practical than others. If German landings had taken place all RAF Commands would have involved. For many these would have been suicidal attacks in obsolete aircraft.

A Short Sunderland on patrol. 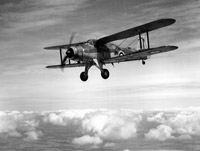 “Watching water” was a major occupation for Coastal Command during the Battle. It was important that German U-boats did not stop vital supplies reaching Britain.

Hawker Hectors had been involved in desperate attempts to resupply the British garrison at Calais at the end of May.

Since then many had been involved in anti invasion patrols. If the German fleet had set sail then the RAF would have thrown everything into the battle. This would have included these obsolete aircraft.

A Fairey Albacore of the Fleet Air Arm.

When they were on shore many of the Fleet Air Arm squadrons were placed under the control of Coastal Command to assist them in maritime operations.