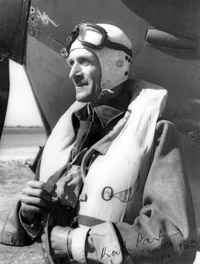 Park was Air Officer Commanding 11 Group Fighter Command, next to Dowding he had the most important job in the Command and his Group bore the brunt of the fighting in the Battle of Britain.

He was born in New Zealand and served in the artillery in Gallipoli and France, joining the Royal Flying Corps at the end of 1916. He held various staff appointment between the wars, being appointed AOC 11 Group in April 1940.

A good tactician with a clear grasp of strategic issues Park knew 11 Group had the largest area to protect and would have the most enemy attacks. With the assistance of radar and the reporting system he was able to place his squadrons in the best position to intercept enemy raids. He also instructed his fighter pilots to divide their attacks between the German fighters and the bombers which were the more serious threat.

After the Battle he was removed from Fighter Command and sent to Training Command. Later in the war Park successfully commanded operations in Malta and the Far East. 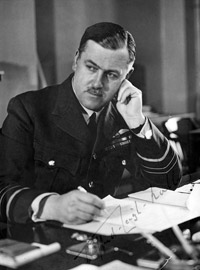 Leigh-Mallory joined the Royal Flying Corps in 1916. He was noted as an ambitious officer but not one universally liked by his subordinates. Between the wars he held various staff postings.

During the Battle of Britain he was the centre of a major controversy, concerning how RAF fighters should be deployed. He promoted what he called the ‘Big Wing’ concept of massing up to five squadrons in a single fighting formation. When it worked this tactic allowed a major force to attack and destroy large numbers of enemy aircraft. Unfortunately it took time to organise and often arrived late. Park, the commander of 11 Group, disagreed with this and preferred to deploy his squadrons separately in order to disperse incoming raids before they reached their target.

After the Battle of Britain Leigh-Mallory gained rapid promotion. He replaced Park at 11 Group and then took over Fighter Command in 1942. In 1944 he was chosen to command the Allied Air Forces in South East Asia Command but was killed when his Avro York crashed on the way to India. 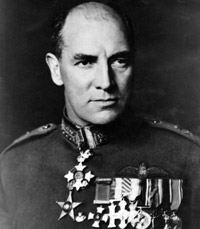 Quintin Brand was Air Officer Commanding 10 Group, and was responsible for the defence of southwest England and Wales during the Battle of Britain.

After the war he remained in the RAF and in 1920 was Lieutenant Colonel Pierre van Rynveld’s co-pilot on the first flight from England to Cape Town, for which he was knighted. In the 1930s he was seconded to the Egyptian government as Director General of Aviation, returning to a staff appointment at the Air Ministry in 1937.

He supported AVM Keith Park in using smaller groups of fighters which were more quickly and easily deployed against incoming German formations. He later took over as Air Officer Commanding No 20 (Training) Group.

After retiring in 1943 he lived in Surrey before moving to Rhodesia in 1950. 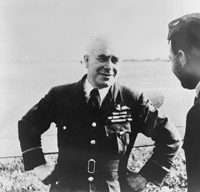 Richard Saul was Air Officer Commanding 13 Group and was responsible for Britain’s northern air defences during the Battle.

He was born in Dublin and during the First World War flew as an observer in the Royal Flying Corps after his transfer from the Army Service Corps in 1916.

After serving in Iraq in the early 1920s he held a series of staff appointments including Senior Air Staff Officer at Fighter Command where he helped organise it into an effective fighting force.

In March 1939 No 13 Group was reformed to defend Northern Ireland, the north of England and Scotland including the strategically important naval base at Scapa Flow. Richard Saul took over command in the summer.

During the Battle his Group area provided essential recuperation space for battered squadrons from the south. After the Battle of Britain he took command of 12 Group where he remained until 1942 when he became Air Officer Commanding Air Defences Eastern Mediterranean. He retired from the RAF in 1944.

He was a keen sportsman and played for the RAF at rugby, hockey and tennis.