During the occupation of Poland the Germans and the Soviets killed over six million citizens or 20% of its population.

Warsaw alone suffered 700,000 dead; a figure greater than the fatalities of the UK and USA combined. PAF special operations units supported the resistance fighters of the Polish Home Army and, despite heavy casualties, attempted to supply them during the ill-fated Warsaw Uprising of August to October 1944. To help protect those at home from reprisals, the exiles sometimes used false names or covered their faces in photographs.

After the Yalta Agreement of February 1945, the Poles watched helplessly as their country was taken over by the communists. As those that returned home risked death or imprisonment, most chose to remain in this country or began new lives abroad. For political reasons, Polish servicemen and women were excluded from the Victory Parade in London in June 1946. 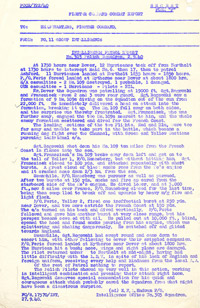 The Poles, who had fought so hard and sacrificed so much, felt they had been betrayed. Nevertheless, veterans remembered their years of service with the RAF with pride and affection. The British in turn admired the men and women who had fought alongside them and hundreds of Poles were readmitted to the peacetime air force.

In November 1948, a memorial dedicated to the 2,408 Polish airmen killed during the war was unveiled at RAF Northolt. The memorial bears an apt inscription:

I have fought a good fight, I have finished my course, I have kept the faith.

In 1990, 51 years after the German and Soviet invasions, Poland held open elections and at last took its place among the free nations of the world.