William Meade Lindley Fiske III was born in New York in June, 1911, the son of a successful international banker.

His family was wealthy, and Fiske attended private schools, and then Trinity College Cambridge. While in England he developed a love for the country and the people.
Fiske showed an early interest in sports and speed. He started bobsleighing in Switzerland, where he held the record for a long time for the famous Cresta Run. In 1928, aged just 16, he was given a place on the American five-man 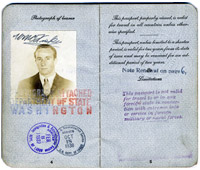 bobsleigh team in the Winter Olympics (the only year that there were five people on the teams). In 1932 he was made captain of America’s four-man bobsleigh team, and carried the US flag at the opening ceremony. At both Olympics Fiske’s team won the Gold Medal. In the years between he also took part in numerous driving rallies and competitions, including the Le Mans 24 Hour Race when aged just 19.
After leaving Cambridge Fiske took up a post with the international bankers Dillon, Reed, & Co., 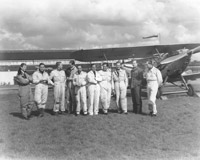 working mainly in Europe. This gave him the chance to indulge and develop his sporting interests, and his growing love of the British. He became a member of the exclusive White’s Club in London, where he met and socialised with many members of No.601 Squadron, Auxiliary Air Force (AAF). In 1938 he met Rose Bingham, the former Countess of Warwick, whom he later married. Encouraged by his new friends in the AAF, he also learned to fly.