The Battle of France

“We have been defeated; we have lost the battle”

In a six week lightning campaign German forces over-ran Holland, Belgium and Luxembourg, humiliating the British and defeating the French.

A diversionary attack held some of the best Allied units in the north while the main German attack fell on French forces in and around Sedan. Having forced a crossing of the River Meuse the speed and ferocity of the German attack completely overwhelmed the defenders. The Panzers (German armoured tank divisions) then wheeled west and struck out for the sea.

By the time the Germans reached the estuary of the River Somme the Allies realised that they could not save the situation and many British and French troops were evacuated to Britain from Dunkirk.

The German Army paused and then attacked south. Paris was occupied on 14 June and with the loss of their capital the only French thought was how to bring fighting to an end. German forces continued to advance largely unchecked except in heroic isolated instances. 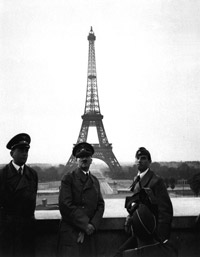 In the early days of May 1940 RAF Fairey Battles were thrown against German held bridges and ground forces.

On the 14th May seventy-one British bombers took off; forty did not return. No higher rate of loss in an operation of comparable size has ever been experienced by the Royal Air Force.

Air Marshal Sir Arthur Barratt, the commander of the Advance Air Striking Force is reported to have cried when the casualty figures were given to him.

After a pause the Germans renewed their offensive on 5 June. This time they struck south.

With much of the French army already defeated and the country disheartened by the course of events there was little chance of halting the attackers.

On 10 June Paris was declared an open city and on 14 June the Germans marched in.

Although seen as the salvation of British forces in fact Dunkirk was a defeat. The Allied troops evacuated had to leave all their heavy equipment and transport behind.