The Royal Air Force lost many men and women during the Second World War. 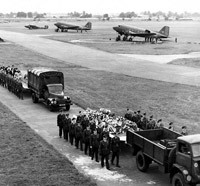 At the outbreak of war a method largely similar to that practiced in the First World War of informing relatives of casualties began again. Families would initially be informed of a loved one being killed in action by telegram or in person. Correspondence would follow, sending condolences from the King and Queen.

As in the First World War, Officers-in-Command of the squadron would send a letter offering sympathy and condolences. A casualty scroll would be sent, honouring the fallen service man or woman. 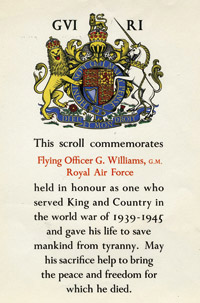 For those families who had received notification of a loved one being ‘missing believed killed’ there was an additional wait for news before they could mourn. Two organisations involved in the search for the missing were The International Red Cross and the Royal Air Force Missing Research and Enquiry Service.

The International Red Cross were often able to get information from behind enemy lines on the fate of missing crew, either killed or taken as prisoners-of-war. They would maintain correspondence with families desperately waiting for news. Unfortunately the news would not always be good.