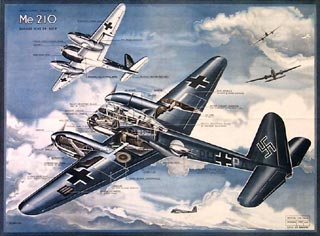 First flown in September 1939 and intended as the successor to the Messerschmitt Bf 110, the Messerschmitt Me 210 heavy fighter was an inherently unstable aircraft which pilots found difficult to handle. Despite substantial modification of its tail unit, this instability persisted and production of the type was suspended in April 1942 while renewed efforts were made to improve its flight characteristics. Some of the aircraft’s vices were eliminated with a redesign of the fuselage and wings, but in all only 352 aircraft were completed (with a further 108 built under licence in Hungary) before production was finally curtailed in 1944. The Me 210 equipped very few Luftwaffe units and its record in combat was uninspiring.

The Messerschmitt Me 410 Hornisse (Hornet) was a simple derivative of the Me 210 and enjoyed moderate success in the light-bomber, fighter and reconnaissance roles. An Me 410A-1, one of only two survivors world-wide, may be seen on display at the Museum’s site at Cosford.