Helen Gwynne-Vaughan was a formidable leader and inspirational speaker. She laid the foundations and set the standards for all women’s air services. 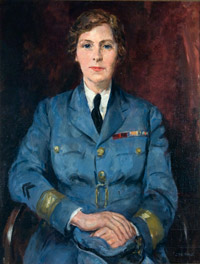 During the First World War, Helen Gwynne-Vaughan was invited by the War Office, along with Mrs Chalmers Watson, to help form the Women’s Army Auxiliary Corps (WAAC). As Chief Controller stationed in France, she was instrumental in creating a respected and disciplined force.

As a result of her success with the WAAC Helen Gwynne-Vaughan was transferred to the Women’s Royal Air Force (WRAF) in September 1918. Given the powers of a Brigadier she began the task of re-organisation. In a short space of time she revised the Standing Orders, overhauled the administrative system, opened and equipped Berridge House in Hampstead for the training of officers, authorised the new blue uniform and introduced military protocol. Her professionalism helped change male attitudes towards women in the air service. In June 1919, in recognition of her achievements, she was made Dame of the British Empire (DBE).

In 1935, Helen Gwynne-Vaughan played a pivotal role in forming the Emergency Services, an organisation established to train female officers. In September 1938, with war once again on the horizon, the Auxiliary Territorial Service (ATS), the women’s branch of the British Army was created. Helen Gwynne-Vaughan was appointed Director, the position which she held until her retirement from military service in 1941.

“By the end of the year the WRAF was the best disciplined and best turned-out women’s organization in the country. This remarkable achievement was due to… Dame Helen Gwynne-Vaughan”
AVM Sir William Sefton Brancker