On 15 March 1943 Wing Commander Guy Penrose Gibson transferred from 106 Squadron to the headquarters of Bomber Command’s 5 Group in order to lead a new squadron formed especially to attack the Ruhr dams. On 24 March 1943 617 Squadron officially came into being at RAF Scampton, Lincolnshire.

One of the main requirements for the use of UPKEEP was that the weapon could not be released higher than 60ft. (18m) or it would be damaged when it hit the water. With this in mind 617 Squadron had to do a lot of dangerous low-level flying training, sometimes with special equipment to simulate night time flying as this extract from Gibson’s Log Book highlights. 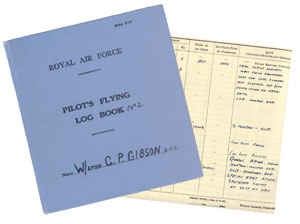